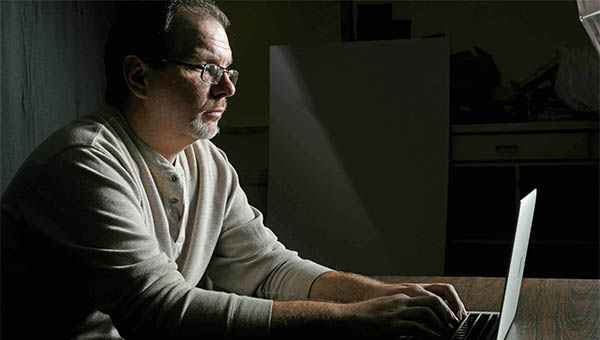 Fifty thousand words in one month is a lot of writing by anyone’s standards, but for the past six years, Marc Mitchell has been pounding the keyboard.

November is national Novel Writing Month and this will be Mitchell’s seventh year to participate in the Internet-based creative writing project, which was founded in 1999 by freelance writer, Chris Baty.

“This is something they have been doing for years to encourage writing,” Mitchell said.

Writing begins on Nov. 1 and ends on the 31. Writers are encouraged to hit the 50,000 mark and if you complete the challenge, you get a certificate, Mitchell said.

Kids and adults can participate, and everyone who writes 50,000 is a winner.

As a published author, Mitchell said the NaNoWriMo project, as it is sometimes referred, has allowed him to improve his writing skills.

“It has really improved some of my sentence structures and punctuation, because I have had some problems like forgetting to put a comma in. But with the project, the more you write the more punctuation comes like second nature to you,” he said.

Mitchell said the month-long intense writing is also a good way to keep your brain active. For example, when Mitchell is not writing, he said, there have been times when he is doing mindless activities, like mowing the grass or trimming the hedges, that he will still get story ideas in his head.

Being part of the project is also a good way to connect with others.

“You get to meet a lot of people. Some who actually go on to pursue writing and others who are just doing the project for fun,” Mitchell said.

Participants are are connected by regions, Mitchell said, and he is part of two regional groups because he is new to Vicksburg.

He said he has stayed active with his previous region and is now part of the Mississippi group.

The NaNoWriMo project also allows participants to encourage other writers.

“Sometimes it gets hard and people will get frustrated because they get that writer’s block and will think, ‘I’m done, I can’t do this anymore,’” Mitchell said, but with the project, writers can converse with one another through a message board.

“You can send private messages,” Mitchell said, “And give encouragement and even helpful hints, like hey, I have been there. I know it’s hard and this is what I do to get over that block.”

Writing buddies are another component of the project, however, Mitchell said, writing is not shared among participants unless permission is given.

“The only way you can read others’ writing is if you contact the individual and they are willing to share,” Mitchell said.

For the past three years, Alex Watson has served as the Municipal Liaison of NaNoWriMo in Mississippi, and he said for him the project is a great way for Mississippians to connect with their rich literary history.

“I think it’s essential for Mississippians to write if they have stories to tell, even if they are not stories about Mississippi specifically. As long as a story has its roots in Mississippi soil, we’re happy to accept it,” Watson said.

Vicksburg has been active in the NaNoWriMo project, since Watson became active in 2008.

At that time, Watson said the former Mississippi Liaison lived near Vicksburg, and held virtual write-ins via AOL Instant Messenger, which served as a way to bring people across the state together.

“It was an incredibly inspiring way of using technology to bring people across the state together,” Watson said, and added that in 2009, it helped him with research for a story.

“I was even able to pick the brain of a Vicksburg-area resident about the finer points of nuclear power plants, a crucial part of my story research. Nothing sinister, of course, but they had worked on the Port Gibson reactor and were able to give my characters a safe way of disabling a Soviet nuclear pile.”

Particiapants’ novels can be on any theme, genre of fiction and language including fanfiction, which uses trademarked characters according to the groups’ website.

NaNoWriMo is a good stepping-stone for those who are interested in writing, Mitchell said.

“Between this and posting some fanfiction on particular websites, this is a way to get that first baby step in,” he said.

Mississippi State is one of seven unbeaten teams in Division I

There are 351 Division I men’s basketball teams in the NCAA. Only seven of those are still undefeated, and perhaps... read more