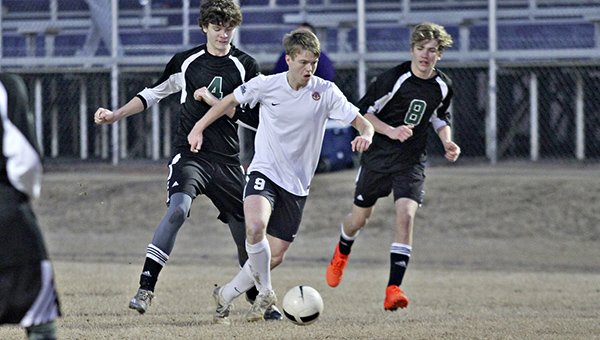 On Wednesday, the St. Aloysius boys’ soccer team lost 3-1 to undefeated Central Hinds. With a few players returning from illness and injury, there was a lot of improvement for St. Al, especially on the defensive side.

Six days earlier, in their first matchup with Central Hinds, St. Al lost 8-0 after going into the half only down 1-0. This time, the game was locked at zero going into the break, but in the second half Central Hinds scored three straight goals before St. Al could strike back.

The teams were almost even in terms of scoring opportunities, with St. Al actually getting 16 shots on goal compared to the Cougars’ 15. The difference was in accuracy, as coach Scott Mathis said his team missed some shots that they usually make, including a flurry of attempts in the last 15 minutes of the game.

St. Al’s only goal came on a penalty kick by Ryan Theriot in the 67th minute.

Now the Flashes will have to regroup and win the rest of their district games to qualify for the MAIS Class AAA playoffs. St. Al will next play Tuesday at Hillcrest. Mathis felt it was ready for the challenge.

“These are big, but it gives us a chance to work on these things that we need to work on,” Mathis said. “I’m not worried about them, because our team can beat anybody if they show up.”

St. Al has started as many as five seventh- and eighth-graders in games this season, including the first one with Central Hinds. While that will certainly help with the experience of future teams, it also affects the depth of the current one.

“Essentially, I have one senior, so I have a lot of young players on this team,” Mathis said. “We’re not big, we don’t have that many kids to choose from, to have what we have, and for them to be able to go out there and stay out there the whole game, is something a lot of teams don’t do.”

In the playoffs, there’s a good chance the Flashes could have a rematch with Central Hinds and a chance to finally snap the Cougars’ 66-game winning streak. Central Hinds has won four consecutive Class AAA championships and beat St. Al in the semifinals last season.

“It happened last year, and we lost 3-2, this year it’s going to be a different thing,” Mathis said of the potential rematch. “Not having a bunch of seniors, I hope that we can step up and do something different but we’ll just have to wait and see.”