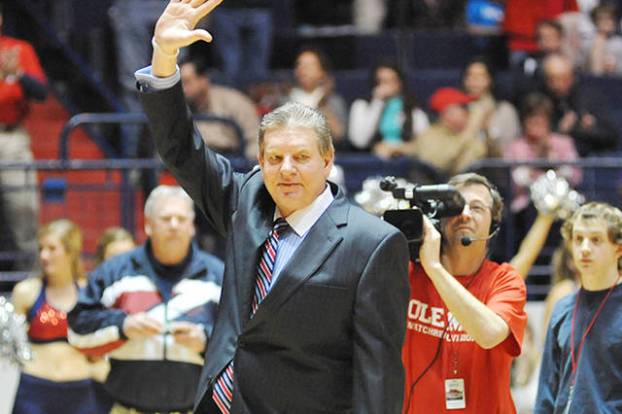 Johnny Neumann, who set records and led the nation in scoring during his time at Ole Miss, passed away Tuesday in Oxford after a battle with brain cancer.

One of the most exciting players in college basketball history, Neumann dazzled Rebel fans during his one season at Ole Miss. As a sophomore, he led the nation in scoring with 40.1 points per game and holds the school’s single-season scoring record with 923 points in 1971. Neumann was also named the Southeastern Conference’s Player of the Year.

Following his one season in Oxford, Neumann joined the American Basketball Association in 1971 and became a member of the Memphis Tams. His professional career also included stops in Indiana, Los Angeles and Utah. Neumann also spent time as a player and a coach overseas in China, Greece, Israel and Japan.

In 2016, Neumann represented Ole Miss as a member of the SEC Legends Class.

Off the court, Neumann returned to Ole Miss where he earned a bachelor’s degree in general studies with minors in journalism, recreation administration and legal studies in 2016.

Neumann was preceded in death by his parents, Robert Herman Neumann Sr., and Margaret Marie Neumann. He is survived by his wife Liliana Neumann of Oxford and his daughter Esmeralda, also of Oxford; daughter Maria and son Michael of Greece; daughter Leslie and son Samuel of Belgium; one grandson Illies of Belgium. He is also survived by brothers Robert Herman Neumann, Jr., (Maria) of Syosset, N.Y., and William Frederick Neumann (Paulina) of Goodyear, Az.; and a sister Brenda Neumann Wheeler (Billy) of Memphis, Tennessee.

Hodges Funeral Service in Oxford is handling all arrangements. Details on services were not available at this time.

The Trump administration is taking a fresh look at a long-dead Mississippi flood project that the late Sen. John McCain... read more