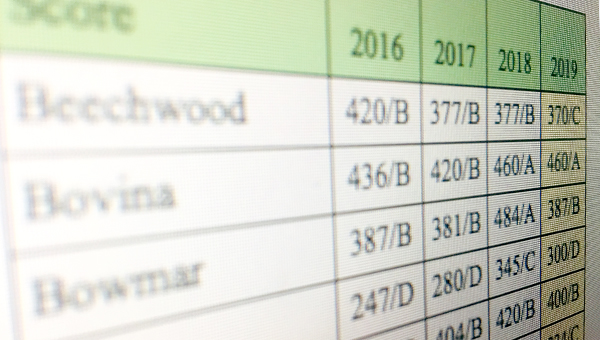 In its annual reporting of accountability scores, the Mississippi Department of Education released information showing the Vicksburg Warren School District had stood ground with its letter grade, but the numbers tied to that grade have district leaders encouraged with the results and the trends.

While this marked the fourth straight year the district has received a D letter grade, the differences in the district’s scores over that same time have shown consistent improvement, with a significant jump between 2018’s score and the score reported Tuesday.

“These gains are proof that when we set student-by-student goals and create cultures of accountability at our schools, we can achieve great things. I am proud of the hard work of our teachers, students, parents and staff members,” Vicksburg Warren School District Superintendent Chad Shealy said. “We are consistently doing what is right for kids and certainly moving in the right direction.”

In fact, if the 2019 score had used graduation rates for those students who graduated in May, it is believed the district would have reached the C level.

The graduation rate measures the percentage of students who complete high school in four years.

“Our steady increase in graduation rate is a result of building relationships with our students and adding relevance to our classrooms,” Shealy said. “We have adopted the paradigm that all kids have genius and it is our job to show them how to apply it.”

As far as Warren Central and Vicksburg High Schools, the report showed double-digit increases at both schools in participation and performance in the acceleration score.

In math proficiency and growth, Bovina Elementary again led the way with a score of 68.7 percent. Redwood Elementary (64 percent) and Warrenton Elementary (51.5 percent) came in second and third respectively.

Warren Central Intermediate and Warrenton Elementary also improved in the growth of the lowest-performing students.

Two schools, in particular, stood out, showing increases in each of the four measured areas from one year to the next.

“Hi, my name is Jim.” For a 4-year-old, pre-K student at Dana Road Elementary School, they might not know who... read more