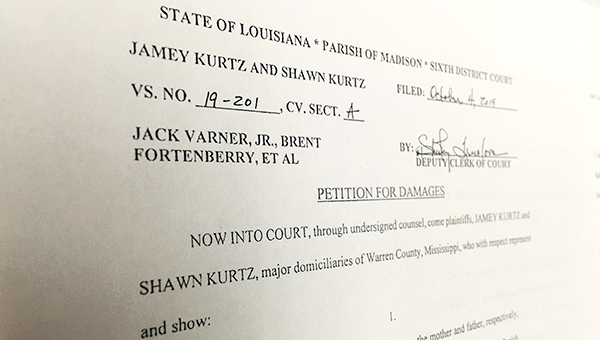 A Vicksburg family is taking legal action — and seeking damages — against those they believe were responsible for the untimely death of their son.

Shawn and Jamey Kurtz filed a lawsuit in the Sixth District Court of Louisiana last week, claiming the actions of a number of defendants resulted in the death of their son, Carson, in June.

Carson, who was 15 at the time of his death, was killed on June 21, when the ATV on which he was passenger wrecked on a road near Old Louisiana 65 in Tallulah, La. At the time, there was no information when the accident occurred, but deputies with the Madison Parish Sheriff’s Office were dispatched at 5:20 a.m.

Herring, Avery and Fortenberry are claimed in the suit to have purchased and provided to Carson, and two other minors, “alcohol for consumption.” Two other juveniles are named in the lawsuit. There was no clarification as to which “Herring” is accused of purchasing and providing the alcohol.

Further down in the lawsuit, the family claims “Varner, Avery and/or Fortenberry provided a Polaris Ranger utility motor vehicle capable of high speeds for use by [the other juveniles] and/or Carson Kurtz” and “permitted said minor children to use said motor vehicle without proper instruction, training, warning or supervision.”

The suit says the accident happened “on the evening of June 21, 2019, or alternatively during the early morning hours of June 22, 2019.” It also lists Carson as a passenger of the ATV, with one of the other juveniles driving. It also claims the two other juveniles obtained alcohol prior to the accident.

The road where the accident happened, the suit claims, “presented an unreasonable risk of harm to visitors.” The suit also says that Varner “had actual or constructive notice of the hazardous condition of the premises prior to the accident.” It states that the road “on the premises was inadequately marked for nighttime travel and the condition of the road was inadequate for travel at the speeds at which the motor vehicle was designed and capable of traveling.”

In addition to placing blame on the defendants for their alleged actions leading up to the accident, the lawsuit claims Fortenberry “intentionally removed and/or altered evidence of the cause(s) of the accident, including without limitation the removal of all evidence of alcohol consumption by the minor children from the scene.”

The couple asks for a jury trial in the case and requested damages “permitted by law.” Those items that damage has been requested include pain, suffering and mental anguish suffered by Carson Kurtz prior to his death; mental anguish and emotional distress suffered by plaintiffs as a result of Carson Kurtz’s death; loss of the love, affection and support of Carson Kurtz; funeral expenses and all other damages permitted by law.

When contacted Friday, Jamey Kurtz declined to comment, asking all comments on the case come from her Monroe, La.-based attorney. A message left with the attorney by The Post has not been returned.

Prior to attending St. Aloysius, Carson was a student and soccer player at Warren Central High School.

Downtown security and traffic enforcement were two major topics of concern during a public safety town hall held by the... read more