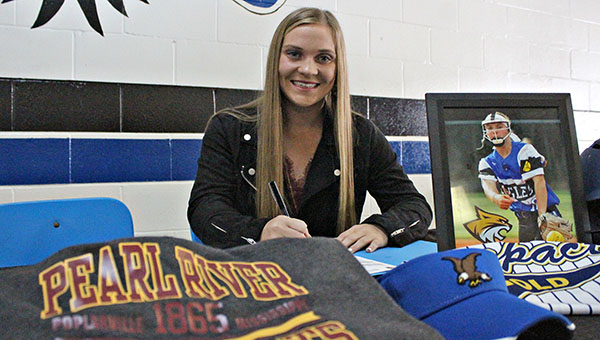 SIGNED WITH PEARL RIVER: Porter’s Chapel Academy softball player Hannah Embry signed with Pearl River Community College on Friday. Embry led the Lady Eagles to a second-place finish in the MAIS Class 2A state tournament this season and was selected to the Class 2A All-MAIS team. (Ernest Bowker/The Vicksburg Post)

When the recruiting process began, Hannah Embry was getting plenty of attention and offers from Division I programs. Eventually, however, those started drying up.

It was through no fault of her own. The star softball pitcher for Porter’s Chapel Academy had an outstanding season both in high school and on the travel ball circuit. It was because the coaches recruiting her lost their jobs.

Coaching changes at Southern Miss, South Alabama and Louisiana-Lafayette led to scholarship offers from those schools evaporating. Changes to recruiting rules for the Class of 2020 restricted how much the new coaches could contact her.

In the end, then, it was fitting that Embry wound up signing with Pearl River Community College because of a coaching change. The Wildcats’ new head coach, Christie Meeks, is her personal pitching coach. Meeks also recruited Embry when she was an assistant at Mississippi Gulf Coast Community College.

“It was hard, because with the 2020 class the rules changed and then all of the coaches switched schools — like, every one of them. I went where my pitching coach went,” Embry said after signing with Pearl River last week. “She’s the main one I talked to at Mississippi Gulf Coast, and then she moved to Pearl River so I just kept talking to her.”

Embry had a remarkable season and high school career at Porter’s Chapel. She became the team’s primary pitcher as a sixth-grader in 2013 and stayed in that role for seven seasons. Over the past five seasons, Embry has thrown 670 innings and recorded 760 strikeouts.

Embry was the 2017 Vicksburg Post Player of the Year, but saved her best season for last. While leading PCA to a runner-up finish in the MAIS Class 2A state tournament, she posted a 23-7 record and 0.95 ERA while striking out 250 batters in 161 2/3 innings. She was an MAIS All-Star and named to the Class 2A All-MAIS team.

“It was good. It’s the farthest we’ve ever made it. It’s even better because it was our senior year. I wish we would have won (the state championship), but it was still good,” Embry said. “It’s something we’ve been working for.”

Embry is not done working, either. She opted to go the junior college route after her Division I offers dried up, but still dreams of playing for a major program. She’ll likely get another chance in a year or two.

“I want to go play D-I after juco. I just have to work hard and play good, in front of good coaches,” Embry said.

When he was younger, Haden Luke says he always looked up to his brother Chandler and wanted to excel in... read more