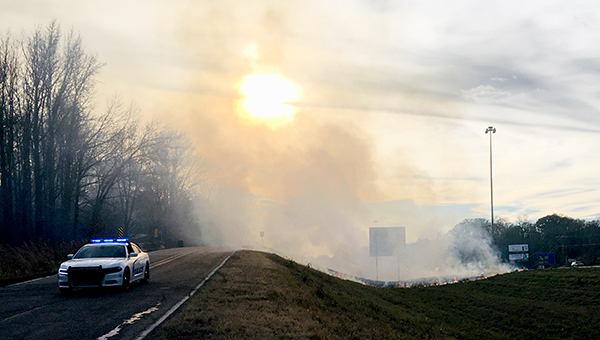 An officer with the Vicksburg Police Department closes a portion of South Frontage Road Monday as smoke from grassfires along Interstate 20 eastbound obscure the view of drivers. (Tim Reeves/The Vicksburg Post)

Multiple units from the Vicksburg Fire Department responded to a number of grass fires along Interstate 20 eastbound Monday.

Around 4 p.m., units were dispatched to four grass outbreaks on I-20 between Indiana Avenue and East Clay Street exits.

Fire Chief Craig Danczyk said officials believe the fires were started by a tire that had caught fire and then started breaking apart, igniting fires along the side of the interstate. Danczyk said firefighters discovered burning rubber at the site of some of the fires.

As the fires burned, officers with the Vicksburg Police Department shut down the right lane along I-20, creating a significant back-up on the interstate. Smoke from the fires caused officers to close portions of South Frontage Road to traffic.

Hundreds turn out for start of Christmas in the Park

Hundreds turned out Friday evening for the start of the inaugural Christmas in the Park in downtown Vicksburg. “It was... read more