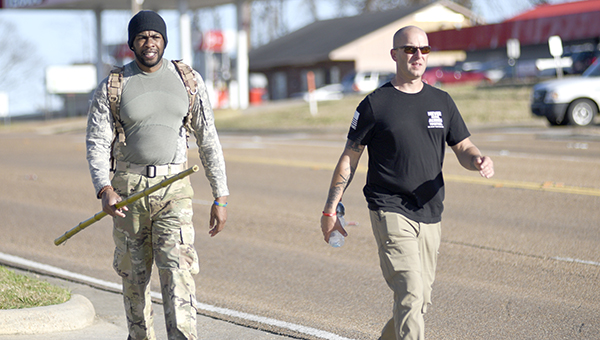 John Ring is walking for a special group of people.

Oct. 1, Ring began his trek at the Tybee Island, Ga., Pier, setting out on a 2,462-mile journey to the Santa Monica Pier to call attention to the problems facing America’s veterans. He spent Wednesday and Thursday in Vicksburg, leaving Friday morning.

A resident of Richmond Hill, Ga., and member of the Georgia National Guard’s 48th Infantry Brigade Combat Team, Ring got the inspiration for the walk from his own experience with veterans.

“For the past year, I’ve been working with a lot of veterans; a lot of veterans in our criminal justice system trying to get them back on path with receiving proper treatment for PTSD (post-traumatic stress disorder), addiction and got disgruntled with some of the things I was seeing, so I reached out,” he said.

“I always wanted to walk across the country; I wanted to do that personally.”

Ring contacted Jo Coleman, the founder of Buddy Watch Inc., in Midway, Ga., a nonprofit organization that is working to provide tiny homes for homeless veterans. “I reached out to her and told her I wanted to do this; I wanted to walk across country to raise awareness of veterans issues, homelessness, PTSD, addiction, and everything leading to the horrific number of veteran suicides that are going on every day in the country,” Ring said.

He also offered to help raise money for Buddy Watch’s tiny home project as he walked across the country.

“I feel if you wear the uniform you need to help those who have served,” Ring said. “I come from a military background, so I think it’s important that we help; not just people who serve, but basically everybody. Give back to the veteran community and help people. Make sure veterans aren’t homeless and they’re receiving treatment.”

For veterans with PTSD, Ring said, “The best person for them to speak to is somebody who’s actually been there and actually understands it,” but sometimes, he said, just having someone who serves in the military and “understands what we do,” will get a veteran to talk about their problem.

Ring said he has been well received on his trip.

“I’ve met a lot of amazing people; people who stop on the side of the road and say ‘hi’ and ask what I’m doing,” he said. “I’ve met several emotional veterans along the way who were really happy with what I’m doing and told me a little bit about their story.”

One veteran, Jimmy Matthews, a retired Army master sergeant, joined Ring on his walk in Pearl.

“Jimmy reached out to me when I started my walk and said I inspired him,” Ring said. Initially, Matthews was going to walk across Mississippi but later made the commitment to walk to California.

He has had several service members help him with lodging for the night.

“I’ve slept in multiple different places; if you can think about it, I’ve probably slept there,” he said, “But it’s been a very good experience, but out of the people who have been supportive of me, it’s been a small portion of the population.”

Many people, he said, seemed stuck in their own world; worried about other things.

“I’ve seen that; walking down the highway, about 200 cars pass me and I’ll get one beep,” Ring said. “People are kind of absorbed into everyday life, and I’m pulled away from that and seeing things differently.”

He said the Mississippi American Legion “has been phenomenal,” adding since he crossed the state line at Toomsuba, Mississippi Department Commander James Till “has been with me every step of the way. I have not slept outside one night in the state of Mississippi.

“He has had his post commanders and district commanders driving out to meet me, checking on me as I was walking, picking up my bag, taking me to a hotel room they’ve gotten for me.”

“This has been an interesting experience,” he said, adding he plans another walk for 2021 in Europe with his son from Normandy, France to Berlin, Germany.

Vicksburg Police are looking for two men wanted in the armed robbery of the Dollar General Store on U.S. 61... read more