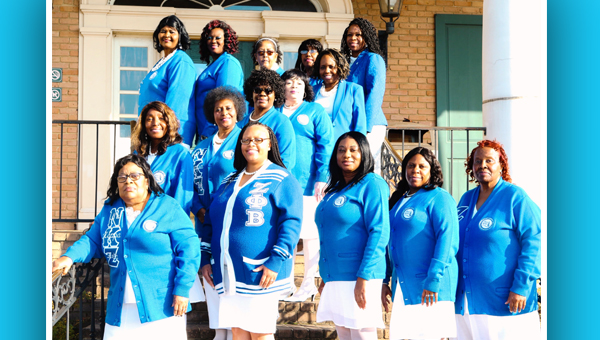 Members of the Nu Kappa Zeta chapter of the Zeta Phi Beta Sorority pose for a picture. The year marks the sorority’s centennial and to celebrate, the local chapter will host a Royal Blue and White Gala Saturday.

The Zeta Phi Beta Sorority was founded in 1920, and to celebrate its centennial, the local Nu Kappa Zeta chapter will host a Royal Blue and White Gala Saturday.

The event will begin at 7 p.m. Saturday at the Vicksburg City Auditorium.

Currently, there are 33 members in the local chapter, and Williams said members are chosen based on their character, academic achievements and community service.

In keeping with the sorority’s national mission, Williams said, the Nu Kappa Zeta chapter is involved in many community and area projects.

“We are group partnerships with females of the community by sponsoring Amicae and youth auxiliaries that include the Pearletts, Amicettes and Archonettes,” Williams said.

The chapter also sponsors plays, award banquets, and galas, and also partners with the Sigma Brothers of Kappa Epsilon Sigma Chapter in Vicksburg to coordinate a blood drive in December.

Other projects, Williams said, include assisting with the Meals on Wheels program, sponsoring a health awareness fair and contributing to community illiteracy eradication programs.

The local chapter has also served as the graduate sponsoring chapter for Zeta Chapter at Alcorn State University since 1989.

Saturday’s event is open to the public and the cost is $25 per person and will include entertainment and a full meal, Williams said. For more information, 601-415-7239.

Riles Funeral Home has a new owner, but a familiar name