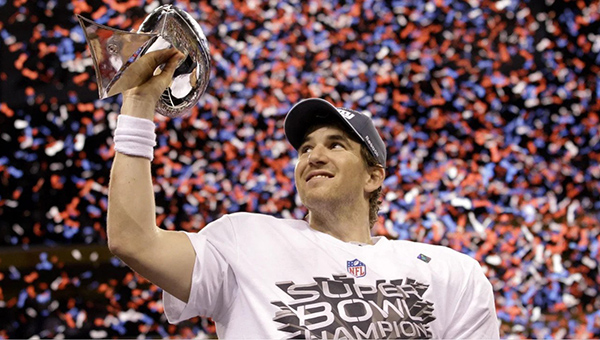 New York Giants quarterback Eli Manning holds up the Lombardi Trophy after beating the New England Patriots in Super Bowl XLVI in 2012. Manning, a former Ole Miss star, will have his jersey retired by the school next season. (Courtesy of the New York Giants)

Even before it was announced this week that he would retire, Eli Manning’s legacy was a popular and complex topic among sports fans.

Was he one of the all-time great quarterbacks in NFL history? Good enough to be a Hall of Famer? Two Super Bowl championships and a top-10 ranking all-time in passing yards and touchdowns says he is. A .500 overall record and 244 career interceptions might say otherwise.

Did Eli ride the coattails of his older brother and famous family? Or was winning two Super Bowls with the New York Giants enough for him to stand on his own?

All of those questions will be debated for years. Manning isn’t eligible for the Pro Football Hall of Fame until 2024.

What is more certain is that, in a state with no shortage of sports legends, the former Ole Miss star is one that Mississippi can be proud of for decades to come.

Manning’s on-field accomplishments, in many ways, are dwarfed by the way he used his superstar status to help others off the field. Starting when he played at Ole Miss, and throughout his career with the Giants, Manning has helped raise or personally donated millions of dollars to charitable causes.

A children’s clinic at Blair E. Batson Children’s Hospital in Jackson was opened in 2009. It is named for Manning after he and his wife Abby helped raise $2.5 million for its construction. In 2016, they donated $1 million of their own money to a capital campaign to expand the hospital.

In New Jersey he helped launch the Tackle Kids Cancer initiative through the Hackensack University Medical Center’s Children’s Cancer Institute. The cause raised more than $4 million in its first year — Manning matched $135,000 in donations to get things started — and has been a public face in fundraising efforts.

And those are just some of his more public efforts. Manning has made phone calls to donors, visited sick children in hospitals, worked to get others involved, and made donations to dozens of other causes, often with little or no publicity.

The dopey “Eli Manning Face” became a meme during some of his lesser on-field moments. It might live on, as will the debate about whether he should be ranked among the NFL’s all-time greats or was merely very good and lucky. Neither are fair to the man behind the facemask.

Eli Manning’s real legacy is as someone we can remember and be proud of for all of the right reasons.