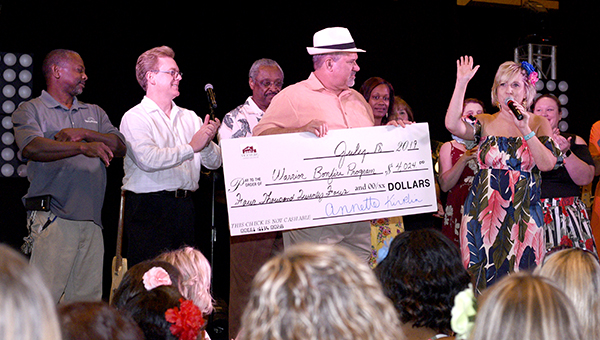 Dan Fordice, with the Bonfire Warrior Program, center, is presented with a check during the annual Ritz on The River at the Vicksburg Convention Center in July. Proceeds from the event went to support the program. (Courtland Wells/The Vicksburg Post)

A Vicksburg charity organization is now streaming on a version of the “big screen.”

The Warrior Bonfire Program announced this week the first episode of the television show “Warrior Bonfire” is available on Amazon Prime Video.

WBP is a charity organization committed to providing opportunities that improve the lives of Purple Heart recipients on their life long journey of recovery and healing by providing activity-based retreats that encourage the therapeutic healing of peer-to-peer group conversations in a stress-free environment.

The organization was founded in Vicksburg by Dan and Hunter Fordice and has locations in Colorado, Florida, Lousiana, Mississippi and Texas.

The Amazon Prime series is scheduled to have six episodes, although WBP President Lt. Col. Mike Foss said there is an option to produce more if there is enough interest.

The series was produced by Nik Coleman of Coleman Television LLC.

“One of our founders, Dan Fordice, saw a film produced by Nik Coleman and was so impressed that he felt Nik could make a film regarding the Warrior Bonfire Program,” Foss said. “After talking about it, Nik felt a series would be better.”

According to Amazon Prime Video’s description of the series, Warrior Bonfire “follows Purple Heart recipients as they converge in small groups and venues across the United States to share companionship, activities and most importantly, their stories with comrades. Many are suffering the deepest wound of all — PTSS, and all (seek) refuge and reassurance with their comrades in this hard-hitting, emotional but ultimately life-affirming series.”

“Many people feel the word disorder is inaccurate and negative,” Foss said. “What I try to do is simply use Post-Traumatic Stress as there is negativity around PTSD and confusion with PTSS. I ask you to do the same.”

The series features both Foss and Fordice and is designed to show the nation how Wounded Warriors learn to heal from the effects of Post-Traumatic Stress through bonding with their brothers and sisters in arms in the great outdoors.

To find the series, visit www.primevideo.com and search for “Warrior Bonfire.” Amazon Prime members can watch the series for free. Those who do not subscribe to Amazon Prime can buy an HD version of the episode for $1.99. Proceeds from HD purchases will first go toward compensating the producer of the series. Once the producer has been paid, the proceeds will go to the Warrior Bonfire Program.

The Warrior Bonfire Program is a 501(c)(3) non-profit organization. Donations are used to support veteran participants and their families and are tax-deductible. For more information, go to www.warriorbonfireprogram.org.

A hill softened by three days of rain collapsed Thursday morning, sending the large portion of a vacant lot on... read more