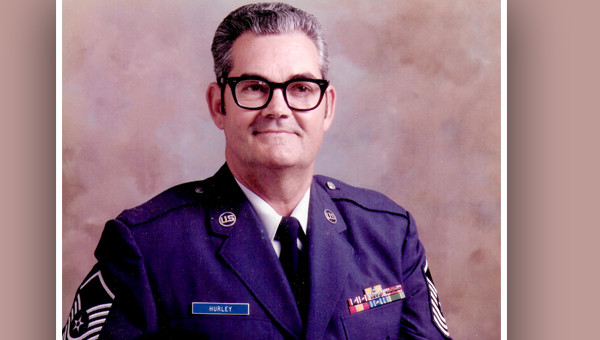 Jimmy Glenn Hurley passed away at his home on Thursday, March 12, 2020, surrounded by his family. He was 85 years old.

Jimmy was born in Corinth in 1934. He attended the University of Mississippi from 1953 to 1955 where he played football.

In 1955, Jimmy left Ole Miss to join the United States Air Force. He began his military career as a drill instructor and later became a flight simulator manager. He was selected to participate in the nuclear power program which aided him in his later employment at Grand Gulf Nuclear Power Plant.

Jimmy retired from the USAF in 1982 as a senior master sergeant, ending a 27-year career. Jimmy worked as a nuclear physicist for 14 years at Grand Gulf.

Jimmy was an avid sportsman enjoying fastpitch softball, golf, bowling and numerous other activities at all stages of his life. He also won several local golf tournaments for Grand Gulf as well as the National Retired Military Golf Classic in 1998 in Myrtle Beach, S.C. His love of flight simulation led him to obtain his civilian pilot’s license. He continued to enjoy flight simulation throughout his life sharing this passion with his children and grandchildren.

He is preceded in death by his parents, Arvie Glenn Hurley and Mary Josephine Surratt Hurley of Corinth.

Jimmy was a loving and caring man to his wife and set a high standard for all to follow. He was a mentor to his children, grandchildren and great-grandchildren and always taught them to do their best.

Visitation will be held on Monday, March 16, 2020, from 1-3 p.m. at Glenwood Funeral Home. A chapel service will immediately follow visitation.

If you would like to make a donation in lieu of flowers, please donate to the Alzheimer’s Association in memory of Jimmy Glenn Hurley.

Funeral services for Mineva Russum will be held Saturday, March 14 at 11 a.m. in St. May’s Episcopal Church with... read more