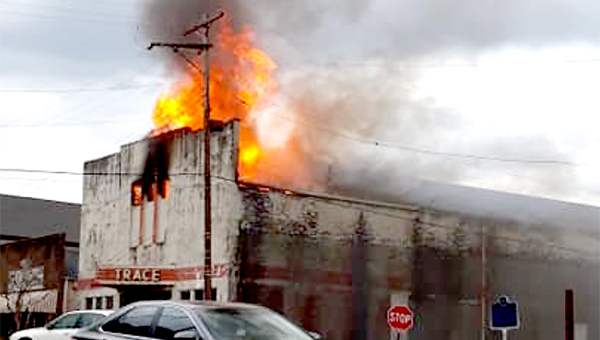 Brenda Bailey captured this image of the fire at the Trace Theatre in Port Gibson Friday evening. Multiple units, including a unit from the Vicksbug Fire Department, is responding. (Submitted Photo)

First responders in Port Gibson and Claiborne County are working to control a large fire that has consumed the historic Trace Theater in Port Gibson.

At around 7 p.m., units from the Vicksburg Fire Department were called to assist.

The Trace Theater is located at the corner of Market Street and Carroll Street in Port Gibson and is considered a landmark in the city.

According to cinematreasures.org, the Trace Theatre was owned and operated by the Ewings of Fayette as was the Fay Theatre in Fayette and the AutoVue Drive-In in Lorman.

Other records show the building suffered a fire in 1948 and another in 1968 that reportedly caused the business to shut down for good.

This is a developing story. Check back for updates.