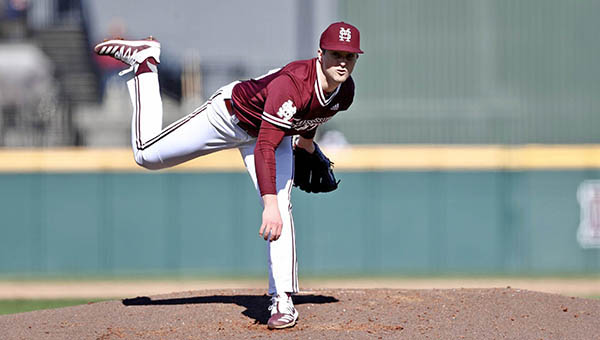 Mississippi State pitcher Carlisle Koestler follows through on a pitch. The former Warren Central star started in the Bulldogs’ last game, a 3-2 win over Texas Tech, before competition was halted by the coronavirus outbreak. (Mississippi State Athletics)

MSU’s Koestler deals with pandemic aftermath and an uncertain future

On Monday he was driving home from Starkville to Vicksburg after cleaning out his locker and having one final, hurried meeting with coaches and teammates.

Koestler and his Mississippi State teammates — and people everywhere, for that matter — had their worlds turned upside down in a matter of days as the coronavirus pandemic brought American life to a standstill. In the sports world, uncertainty and confusion reigned as college and professional leagues canceled or suspended seasons literally overnight.

“It’s kind of crazy. Tuesday, we had heard talk that Oregon was playing without fans. We had no idea they would cancel the whole thing,” said Koestler, a Vicksburg native and former Warren Central star. “We were treating it like normal, and then three days later your whole season is over. You never would have thought this would have happened.”

Koestler got a no-decision despite a solid outing in the finale. He pitched five innings and allowed one run on four hits, with three strikeouts.

As Wednesday’s game unfolded, however, so did a wave of momentous events around the country. President Donald Trump addressed the nation about the coronavirus pandemic and banned travel to and from Europe. The NBA suspended its season after Rudy Gobert of the Utah Jazz tested positive for coronavirus. Every Division I college conference, including the Southeastern Conference, canceled their basketball tournaments within the next 24 hours.

“I didn’t hear anything during the game. The only time I knew stuff was going on was after the game, when our PR guy said if they ask you anything about the coronavirus just say you don’t know,” Koestler said. “I was getting ready to pitch against Arkansas in relief if I needed to. You didn’t even realize it was the last game. We were trying to look toward Arkansas and get ready for them.”

The next five days were a blur. By Friday, the NCAA had canceled the College World Series and all winter and spring sports championships. The SEC suspended competition until March 30, and then on Saturday extended the hiatus to April 15.

Campuses were closed across the country. Koestler said he and his teammates were allowed to return to Starkville to clean out their lockers, but had to leave immediately afterward.

“They were just saying after Monday you can’t come back in the locker room. Get everything you need, and they’re going to reassess on the 15th. They said they were going to reassess in a couple of days and they couldn’t meet with us after Sunday,” Koestler said.

On Tuesday, the SEC canceled the remainder of its spring sports season. Even before that, Koestler was pessimistic that anyone would step on a baseball field again this spring.

“The way that I see it, pretty much every conference except the SEC is canceled already. Baseball is not like basketball, where you can pick back up,” Koestler said before the cancellation was announced. “I don’t know how they would do that. You have to get your arms back into shape and hitters have to face pitchers again. I don’t know how you come straight out of the gates like that without practicing. We can’t even practice voluntarily. We can’t even be in the locker rooms. I really don’t think we’ll play again.”

As he drove down Mississippi 25 on Monday afternoon, Koestler pondered an uncertain future. Spring sports athletes have been granted an extra year of eligibility by the NCAA.

If Koestler returns in 2021, it would be his seventh season as a college baseball player. He was granted a medical redshirt after suffering an arm injury early in the 2019 season at Southeastern Louisiana, giving him a rare sixth year of eligibility, and then transferred to Mississippi State as a graduate student.

“We have two other grad students on the team. They’re fifth-year seniors and I’m a six-year senior. They would always joke with me about being a sixth-year. Now they’re looking at being six years, too,” Koestler said. “We would joke around about being a seventh-year and what we would do next year, but I thought there was no way possible I’d be back. But I guess it is possible. I never saw this coming.”

The reality of that might not be all it’s cracked up to be. A number of players are likely to return next season with an extra year of eligibility, and will be joined by a full class of incoming freshmen. There is also some uncertainty surrounding the status of the Major League draft. More players than normal might stick around rather than turning pro.

Even if rosters are expanded for a couple of years, competition for playing time will be even more fierce than normal.

In the meantime, Koestler said he had been continuing to throw in case the season did resume. The sudden stop just before the real part of the season began — conference play was scheduled to start last weekend — was difficult to stomach.

“It feels like summer, but it’s not summer. It’s really weird. It’s about as weird as it gets right now, when you’re canceling your whole season, pretty much,” Koestler said.

The worst part, Koestler added, was wondering what might have been. The Bulldogs were ranked No. 10 in the country and coming off back-to-back College World Series appearances. They will never know if this was the year they finally would have broken through to win an elusive national championship.

“It’s more disappointing in the fact that I thought we were finally starting to click, and do good as a team, and starting to figure some things out as a unit,” Koestler said. “And then to rip that away … we’ll never have this same team again, especially if a lot of the core guys get drafted. Even if most of us come back, it’s not going to be the same team. You never know what we could have done this year or how far we could have went.”