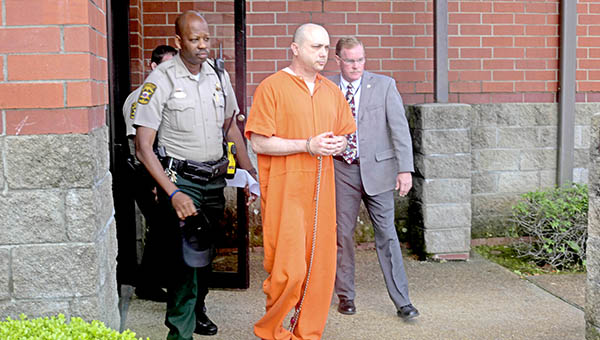 A former church pastor convicted of statutory rape and one count of sexual battery involving two 14-year-old girls was sentenced to a total of 50 years in prison Thursday by Ninth District Circuit Judge Toni Terrett.

The Rev. Troy Anthony Piccaluga, 50, was convicted March 5 on the charges.

Terrett sentenced him to 25 years on the sexual battery conviction and 30 years on the statutory rape charge with five years suspended. The sentences will be served consecutively.

Piccaluga will be taken to the Mississippi Department of Corrections’ Central Mississippi Correctional Facility, where he will be processed and later moved to another facility.

District Attorney Ricky Smith said the total sentence will be served “day-for-day,” meaning Piccaluga will not be eligible for parole or early release.

Terrett said the girls and their families put their trust in Piccaluga. “Unfortunately, that trust was violated,” she said.

“The judge gave him less than the maximum, but it’s close enough that we’re happy with it,” Smith said after the hearing. “I think she saw the damage this man’s actions caused to these two young victims and the life sentence that he had basically sent them to, and she took that into consideration.

“This has really been a special case, and I’ve gotten to know these two young victims and I’m glad we were able to get justice for them,” he said. “He has disrupted two families’ lives, his family’s life and two churches. His actions have caused repercussions throughout the community.

“I commend Judge Terrett for stepping up and entering a sentence that is reflective of what this man has done to these children. I want to commend the sheriff’s office for the work they’ve done, but I also want to commend these young victims. What they went through was incredible.”

Smith asked Terrett to give Piccaluga the maximum sentence for the crimes, saying Piccaluga took a young girl “who admittedly had difficulties and wanted counseling. He took her, brought her into his home, groomed her and then used her.

Instead, Smith said, the former pastor took away what he said were supposed to be the best years of her life.

Piccaluga, then 48 and former pastor of the Eagle Lake and Redwood United Methodist churches, was initially charged with two counts of statutory rape and one count of sexual battery.

Smith said following the convictions the jury was unable to reach a verdict on one of the rape counts.

As the conviction was being announced during the trial, Piccauluga reportedly attempted suicide in the courtroom and was later placed on suicide watch while being held in the Warren County Jail, Warren County Sheriff Martin Pace said.

When the clerk was reading the guilty verdict in his earlier trial, Pace said, courtroom deputies saw Piccaluga, who was out on bond, “pull a handful of what appeared to be pills out of his pocket and take them.”

Piccaluga was taken to the Merit Health River Region emergency room, where he was treated and later released, and booked in to the Warren County Jail.

He was arrested March 30, 2018, at his home in the Redwood community by sheriff’s deputies after an investigation into a complaint about a girl between the ages of 14 and 16 having a sexual relationship with an older man.

The second victim was discovered during the investigation into the initial complaint.

“This case has touched a lot of families; a lot of different people,” Warren County Sheriff Martin Pace said. “I praise my investigators for doing a really good job on this case. They got the information, they took it to the District Attorney’s Office, the district attorney prosecuted the case and did an excellent job and I think justice was served.”