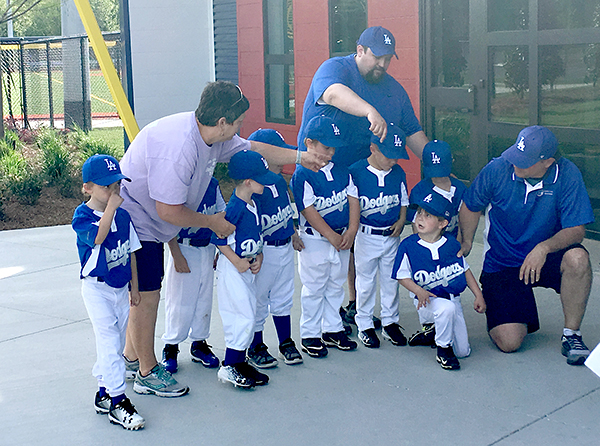 The Dodgers, a teeball team in the Vicksburg Warren Athletic Association, tries to get organized for a team picture in April 2019 at Sports Force Parks. The start of the VWAA’s 2020 season has been delayed by the coronavirus outbreak. (File/The Vicksburg Post)

VGSA and VWAA delay start of seasons because of coronavirus outbreak

This weekend, nearly 800 players, coaches and fans were supposed to descend on Halls Ferry Park for the opening day of the Vicksburg Girls’ Softball Association’s 2020 season.

Instead, all of the fields in town will remain silent. Youth baseball and softball, just like almost every other sport in the country, has been stopped in its tracks by the COVID-19 coronavirus outbreak.

The VGSA and VWAA have both postponed their season openers scheduled for this week, and Sports Force Parks postponed its Battle on the Border tournament set for Saturday and Sunday.

“We were geared up and supposed to have started this Saturday. We started canceling stuff and got to where we could have less and less people out there. It went from 1,000, to 500, and then 50. We usually have 700 or 800 people out there for opening day,” VGSA president Gary Jackson said.

The VGSA is based at Halls Ferry Park, which was closed by the City of Vicksburg as part of its emergency measures to prevent the spread of the coronavirus. Jackson said the league had been hoping to play as scheduled, even if it had to forego its large opening day ceremony, but the park’s closure and changing guidelines altered those plans.

VWAA president Matt Mallard said a decision by several sanctioning bodies to suspend play led his group to change plans. The USSSA announced this week that no sanctioned events were to be played after Wednesday. Other organizations issued similar pronouncements, Mallard said.

“We’re literally ready. We were supposed to play this Thursday night,” Mallard said. “We hate to see everything that has been planned since December get stalled. But baseball will always be here. We’re looking forward to playing, whenever that might be.”

When it will be is uncertain. The City of Vicksburg’s emergency measures will keep the leagues from starting until at least March 30. Both Jackson and Mallard said they were in a wait-and-see mode. They were optimistic both leagues could be playing by early April.

“I think we’re like everybody else. We’re going to watch and see what happens,” Mallard said. “I think that the most optimistic way to go is week to week. If the city changes their plans, then we can go ahead.”

Both league presidents also said there might come a point where there is no longer time for a full season. The recreational season typically wraps up by late May, when the summer travel ball schedule and family vacations start taking players’ time and attention.

Mallard speculated that a summer or fall recreational season is a possibility if the spring season is canceled, but no contingency plans have been proposed.

Jackson said there wasn’t a specific date at which the VGSA season would be canceled, but admitted there will become a point where it would realistically happen.

“We’re not wanting to do that. We keep pushing stuff to make it work, but if it gets too far into the summer it’s not going to work anyway,” Jackson said.

Jackson and Mallard added that the VGSA and VWAA are committed to doing whatever they can to play this spring, even if it gets started a bit later than usual. For the VGSA, Jackson said, that includes all of the pageantry of opening day when all of the teams gather on the Halls Ferry Park fields to be introduced.