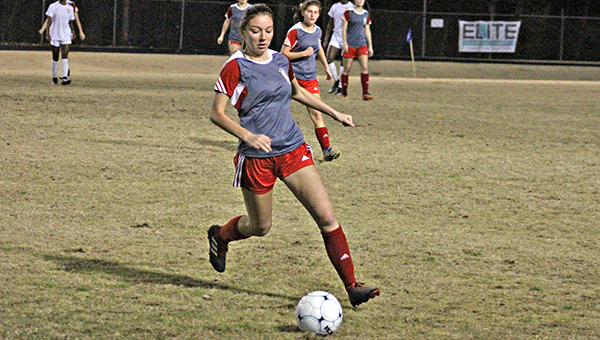 During her stellar high school soccer career, Madelyn Polk has been a lot of things.
A champion. A question mark. A superstar. A college signee.

There was one thing missing from her resumé, however — until now.

The Warren Central senior forward is capping her career as the 2020 Vicksburg Post girls’ soccer Player of the Year. Despite having scored more than 100 goals and being an all-county selection every year she has played on the varsity level, it is the first time Polk has won Warren County’s top individual award.

Polk is also the first Warren Central player to win it since Lindsey Barfield in 2012.

“It’s a really big accomplishment. I really wasn’t expecting to get it, if I’m being honest. There were a few other girls that were ahead of me. There’s a lot of good players on the Warren Central team,” said Polk, who was one of three junior college signees on the Lady Vikes’ roster this season.

Polk burst onto the high school level as an eighth-grader at St. Aloysius, when she totaled 32 goals and 22 assists. Her last goal of the season was the game-winner in the MAIS Division III championship game against Hartfield Academy, which gave the school its first state title.

Polk was also a distance runner on St. Al’s track and field team that won the MHSAA Class 1A championship in 2015, just before the school moved to the Mid-South Association of Independent Schools.

“It was good winning a state championship. That was one of my favorite memories,” Polk said.

Polk spent two more seasons at St. Al before deciding she wanted a different challenge. She transferred to Warren Central in 2018, making the leap from small private school soccer to the biggest high school league in Mississippi in MHSAA Class 6A.

“It was a really big change, going from a smaller school to Warren Central. A lot more people and a lot more competition,” Polk said. “I had to adjust to that, going from private to public. It was more intense and faster, and we played a lot better teams.”

Polk added that she was nervous about switching schools, but was quickly welcomed by her soccer teammates.

“It’s been very exciting, meeting all kinds of new players, having a lot of different coaches and a lot of different learning styles, and getting to play with a lot of good girls,” she said. “I was a little nervous at first. I knew some of the girls, and when I got there all of the coaches and players welcomed me like I had been there forever.”

Polk handled the transition pretty well. A nagging leg injury limited her to a career low 11 goals and three assists in her junior season, but she still led the team in scoring. She started this season wanting to break the 100-goal barrier — she had 87 entering the season — and did it with a four-goal game against Murrah in early December.

Polk finished with 21 goals and nine assists — both team-highs — and finished her career with 108 goals and 75 assists.

“I did set a goal of trying to break 100 goals before the end of my senior year and I accomplished it, so I was proud of that,” Polk said.

Reaching the milestone, and winning the Player of the Year award, put a capstone on a soccer career that is far from over. She has signed with Holmes Community College and will continue on to the next level.

“It was exactly what I was hoping for,” Polk said of her career, before thanking her coaches. “I owe a huge thanks to Coach (Greg) Head and the Warren Central coaching stuff for how they supported me and all the girls through the years. They always gave us good advice not just on the soccer field, but also that we can use later on in life.”