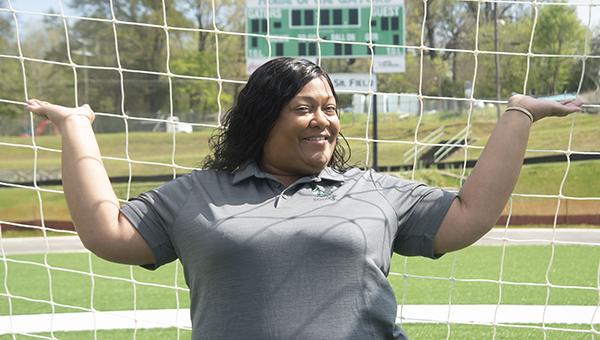 Vicksburg High soccer coach Kristen Williams led the Missy Gators to an 11-4 record this season and the MHSAA Region 4-5A championship. Williams is the Vicksburg Post’s soccer Coach of the Year for Warren County. (Courtland Wells/The Vicksburg Post)

Last summer, Kristen Williams was pressed into emergency service to lead Vicksburg High’s soccer program. No coach was in place, she was one of the few immediately available on the school’s staff with soccer coaching experience, and so she agreed to serve as head coach of both the girls’ and boys’ programs.

“It was necessary,” said Williams, who had coached Vicksburg’s boys’ team during the 2016-17 season. Her son, Christopher, also plays on the boys’ varsity team. “My colleagues and I work together and try to share athletes. I had a few that were in cross country and some in softball, and we know we have to share athletes. It was like, ‘Hey, you’ve got soccer experience, you’re needed. Are you willing?’ And it was like, yes, the kids need me. It was just everybody doing what they needed to do for the kids.”

What could have been a simple caretaker assignment turned into something much more. Vicksburg’s girls’ team won seven of its first eight games before the holiday break. Afterward, it completed a perfect 6-0 run through the Region 4-5A schedule and won the league championship.

The Missy Gators lost in the first round of the MHSAA Class 5A playoffs, but Williams’ resurrection of the program earned her The Vicksburg Post’s soccer Coach of the Year award. The Missy Gators finished with an 11-4-1 record, after going 12-42 combined over the previous four seasons. The 11 wins were the most for the program since the 2014-15 squad finished 11-5-1.

“Extremely elated. I just feel Vicksburg is on the rise in every avenue, and to be a part of that is extraordinary,” Williams said. “It takes hard work, commitment, dedication and motivation on and off the field. To have them from a short time in July until the end of our season, we made major, major progress. So that was awesome.”

Williams said she knew after the first game of the season against Raymond that the Missy Gators might be in for a special year. They had been outscored 27-1 in four losses to Raymond over the previous two seasons, but won 3-2 this time in a season-opening tournament.

After a loss to Warren Central the same day, the Missy Gators ripped off six consecutive victories.

Senior Haleigh Erwin led Warren County with 27 goals, while junior McKenna Elder and seventh-grader Trinity McGloster also scored more than 10 goals apiece. Erwin is one of only two seniors on the roster, and the only starter.

“We hadn’t beaten Raymond in a while. We did it, and that was with no team chemistry, just me fussing and yelling from the sideline and them listening to what I was saying. That was my ‘ah-ha’ moment,” Williams said.

Williams worked with both the boys’ and girls’ teams, occasionally having them scrimmage against each other. The boys finished with a 6-7-2 record and missed the playoffs, but Williams said they helped the girls to improve.

“There were times where we had two separate practices, there were times where we practiced together and scrimmaged together. That actually made the girls stronger,” Williams said. “The girls in the ninth to 11th grade were really the motivation behind the strength and conditioning part. So moving forward, I think next year will be an even better season for the girls. We’ll have summer play and be able to get a little head start on things.”

It was also a small part of another secret to the Missy Gators’ success, Williams added.

“I’m going to say teamwork. It wasn’t just one or two people attempting to carry the team,” she said in explaining the turnaround. “We had people playing different positions, we had people uncomfortable, and you have to be uncomfortable to succeed. They took it all in stride.”