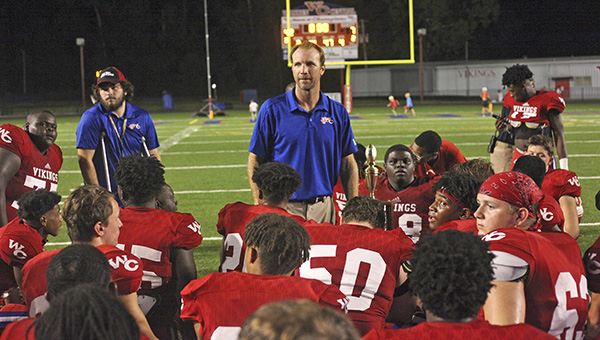 Warren Central football head coach Josh Morgan speaks to his team following a win over Vicksburg High last season. On Friday, the MHSAA announced it has canceled the football spring practice period because of the coronavirus outbreak. (File/The Vicksburg Post)

For the past week, while most of society is increasingly shuttered in their homes to avoid the coronavirus threat, Todd McDaniel has found a way to stay busy.

The newly hired Vicksburg High football coach has been making instructional videos for his team, as many as three per day, to teach them the ins and outs of his unique Wing-T offense. He then shares them to social media, the HUDL web site that is normally used to share highlights and game film, or other video conferencing apps.

“I get on the chalkboard and put our schemes up, and clips of plays so they can see what we do. Ten years ago it would have been tough to do that,” said McDaniel, who was hired in late February. “I imagine right now they don’t have a whole lot of things to do, so I hope it gives us something to watch.”

McDaniel’s plan is one that might become increasingly popular this spring for Mississippi’s football teams as schools remain closed until at least April 17. The Mississippi High School Activities Association has not yet canceled its spring sports season, but on Friday did announce that the remainder of the football spring practice period has been eliminated. 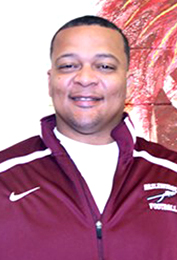 For many programs, that effectively wiped out a crucial offseason development period and forced them to find creative ways to keep their teams on track.

“No doubt about it. It’s been very difficult and very challenging. This will just add to the mix,” said Warren Central head coach Josh Morgan, whose team had also lost the use of its fieldhouse to construction. “The biggest thing is, the spring is the meat and potatoes kind of football. You get a feel for who can do what and you sort of set your depth chart. You want a chance to have your questions answered, and the best time to do it is in spring.”

The MHSAA said Friday that its executive committee is considering adding an extra week of preseason practice to the schedule, but has not yet approved it. Morgan said it wasn’t a good remedy for losing several weeks of spring practice.

The season is scheduled to begin Aug. 21.

“They talked about adding a week before the preseason, but that’s not a very good tradeoff. That’s just three weeks of fall camp,” Morgan said. “The more a kid’s trained and coached, a lot of stuff can be prevented in the way of bad habits and injuries. The more time a coach has with them, the better it is for all involved.”

More than just teaching the X’s and O’s of football, the coronavirus outbreak has put a crimp in teams’ strength and conditioning programs. Fieldhouses and school weight rooms are closed, and many gyms around the state have also closed under emergency orders from local governments.

Since most students don’t have full weight rooms at home, both Morgan and McDaniel said they’re encouraging their players to employ an old school approach on their own. Simple workouts like push ups and sit ups can replace weightlifting. Running sprints in the yard or down the street can help with cardio.

“All you can do, especially for those with a lack of access, is go back to a grassroots deal,” Morgan said. “Everybody’s got a floor. Do push ups and sit ups and things of that nature. There’s definitely ways to succeed, and we’ve got to find them.”

For McDaniel, modern technology is again playing a key role. He said he’s using a daily diet of social media messages to send out workout suggestions in addition to his instructional videos.

“We’re sending out information on things that we would like them to do every day,” McDaniel said. “I’m doing 300 or 400 push ups myself every day and doing things with body weight. Hopefully the kids will do some of that stuff on their own.”

Both Morgan and McDaniel agreed that the next month or two will have a big effect on high school football in Mississippi both in 2020 and beyond. Morgan said new coaching techniques are likely to be developed out of necessity, since coaches and players likely won’t be able to practice together until at least June.

“There’s definitely going to be some innovative new stuff that comes out of this, because it’s never been done before,” Morgan said.

The teams that are most successful are often the ones that work hardest and prepare the best during the offseason. McDaniel said that will be especially true in 2020.

“I’m from the school of hard knocks. We don’t like anything easy. We’d have liked to have had this spring with them, but it didn’t work out that way,” McDaniel said. “We have to get creative. I’m doing two or three (videos) a day so when we get on the field it won’t be foreign to them. I think this season is really going to show you who the best coaches are, more than who has the most talented team.”