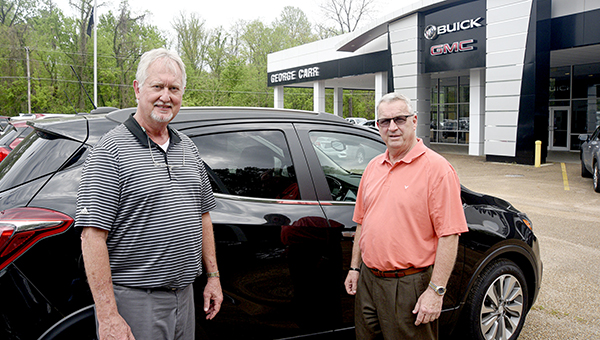 George Carr has been in the automotive business since 1979.

What he and the rest of the automotive industry are facing now is something he has never seen.

While the events mentioned above once slowed the automotive industry, the current concerns about the COVID-19 virus have also changed the way Carr said he is having to operate the different parts of his business; especially with the guidelines to limit the number of people gathered in common areas.

As for the way his teams are interacting with customers, he said that part of the business has also changed.

“The precautions we are taking, making the suggestions about sanitizing, all of the people have hand sanitizer on their desks, we are cleaning the bathrooms more often, we are sanitizing the customer waiting area every morning and every afternoon, we are also asking salespeople to not go on test drives with customers,” Carr said.

The change in policy will allow customers to go on the test drive themselves, leaving their driver’s license with the sales personnel before going on the drive.

“When they come back we will answer any questions they might have, but we are not going on test drives with them. I don’t want a salesperson sitting beside a person in the car who might be sick,” he said. “These are some of the precautions we are doing until we are told otherwise.”

The recent slowdown in the automotive business also comes at a time when Carr said his dealership was having strong sales.

“We started the month of March off just like we were going to have a record month. The first two weeks of March were outstanding, in every department,” he said. “And then it just almost came to a halt.”

But while the slowdown has slowed his business, it has not slowed the steps his team is taking to serve their customers.

“We are willing to take a car to someone’s home and leave the paperwork in the car, let them sign and overnight it back to us. We can sell a car without the customer coming to the dealership,” he said. “We can go pick up your car and have it serviced without you coming to the dealership. All they have to do is call John Tony, our service manager, and they will send someone to pick up their car and we will take it back to them. ”

In the end, Carr understands the concerns most have about the spread of the virus. He shares many of those same concerns.

“I certainly understand everyone’s concerns; I have concerns for my employees. I am asking them to use common sense and be safe,” he said. “But I do understand this is highly contagious and if we have to shut down then we will abide by whatever requirements that we need to do for the state and for the country for everyone to get through this.

“We’re here and we’ll try to work with anybody to keep them as safe as we can.”

Stuart is making a difference one mask at a time

In these uncertain times, it is nice to know good deeds, acts of kindness and reaching out to those in... read more