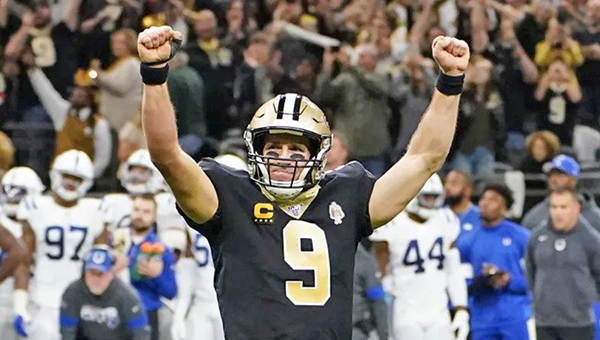 NEW ORLEANS (AP) — New Orleans Saints quarterback Drew Brees says he and his wife, Brittany, will donate $5 million to help Louisiana businesses and communities contend with challenges brought on by the rapid transmission of the coronavirus in the state.

Brees, who posted his pledge on the social media site Instagram on Thursday, says the money will help several restaurants in which he has an ownership stake as well as a major hospital chain and charities like Second Harvest Food Bank to deliver about 10,000 meals per day to people in need.

Known coronavirus cases in Louisiana increased to more than 2,300 as of Thursday morning, with 83 deaths attributable to the virus.

He said in the post that he and his wife will mobilize partnerships with Second Harvest Food Bank, Ochsner Health Systems, Walk-Ons, Jimmy Johns, Smalls Sliders and Waitr.

“The priority now is helping our communities get through this tough time,” Brees said.
Brees says he hopes to fund the program “for as long as it takes to help children on meal programs, seniors, and families in need,” adding, “Let’s all do our part, maintain hope, and get through this together.”

The quarterback and his wife run the Brees Dream foundation, which has spent tens of millions of dollars helping to fund charitable endeavors in New Orleans and surrounding areas along the Gulf Coast.

Most of those efforts have focused on improving learning and recreational opportunities for children as well as health and wellness for children and seniors.

Meanwhile, Saints coach Sean Payton said in a radio interview Wednesday that he is “doing well” after being diagnosed with the COVID-19 coronavirus on March 16.

Payton announced late last week that he had the disease. He told WWL that he was finally cleared after being fever-free for more than a week.

“Look, I’ve been fortunate. You stay inside like everyone’s doing and you find ways to pass time. We had a competition committee meeting the other day on teleconference,” Payton told WWL radio. “But I’m feeling a lot better, and unfortunately my appetite didn’t dissipate at all during that time. You watch a lot of Netflix. Then you go onto Twitter and see that everyone else is watching the same shows. That’s basically been the extent of it.”

When he announced he had contracted COVID-19, Payton said he went public because he wanted to raise awareness that anyone could catch it. He reiterated that message on Wednesday, and urged people to follow state and federal guidelines that include limiting large gatherings and maintaining a 6-foot barrier between other people whenever possible.

“We try asking nicely, and we try saying, ‘Hey look, this is the deal.’ And then you still see behavior that makes you upset. Just picture it as everyone’s got a hand grenade on them. How about that? Alright, so stay away from everybody,” Payton said. “The state has issued — our state right now, and a lot of it has to do with Mardi Gras — but our state right now, the numbers aren’t good. In our city, the numbers are double and tripling. So you get to where you need to get to, and pay attention to every single detail they are talking about. Because when you look at the numbers and you look at what’s happened, when two goes to six, then 28 then the next thing you know you’re at 500, it just tells you how contagious this is.”

Todd McDaniel has never lived in Vicksburg, at least not on a full-time basis, but says he feels a special... read more