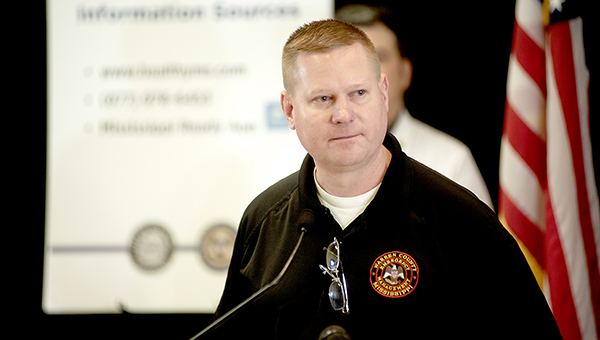 He said Sunday afternoon firefighters and paramedics responded to a medical emergency at the woman’s home on March 25. He said the department learned the woman tested positive for COVID-19; the first Warren County resident to test positive. The Mississippi Department of Health announced the case Sunday.

Danczyk said the woman called 911 complaining of symptoms and said she had returned from a trip to New Orleans.

“There were symptoms that were in line with COVID-19,” he said during a press conference at the Vicksburg Convention Center Sunday. “In this instance, we had an ambulance and fire truck respond to a medical emergency.

“We limited the exposure to the patient,” he said. “We had fire personnel on the scene, but just the two (paramedics) made patient contact.”

Danczyk said the paramedics used personal protection equipment when they went to check with the patient, adding she was taken by ambulance to the hospital.

“I had my staff, and we talked and we also reached out to our medical personnel and advised them to examine for symptoms every four hours,” he said. He said Monday no symptoms were reported.

Using protective equipment, he said, is standard procedure when responding to medical calls that may involve COVID-19, “But you can get exposed. It’s not a guarantee, but it is a front-end measure.”

He said similar procedures to limit contact with patients will be followed on similar calls in the future.

Elfer said the change in policy was established two weeks ago.

“Just a sick person, our county guys are not responding to those,” he said. “We’re letting the Vicksburg Fire Department handle those.”

He said the volunteers are stocked with personal protection equipment, but don’t have enough masks.

Elfer said emergency agencies like the Mississippi Emergency Management Agency, are trying to get supplies to the departments.

“They’re pushing what they can get us; they’re not sitting on anything,” he said. “If somebody calls me with a reasonable request, they’re getting it.”

Danczyk said the fire department has been aggressive in trying to increase its medical supplies for the ambulances, “But there is a limited stock on some items, however. The city of Vicksburg and the Vicksburg Fire Department, we are very good with our amount of protective equipment on the shelves.”

Danczyk said, however, more COVID-19 cases are expected in April.

“We don’t know how to gauge that, but I’m proud of our staff; they are professionals who are taking this seriously. We’re taking extra efforts to decon (decontaminate) both the station and the vehicles every day multiple times a day,” Danczyk said. “I think we are on point with the civil emergency.”

Two more annual springtime events have been added to the growing list of events impacted by the spread of the... read more