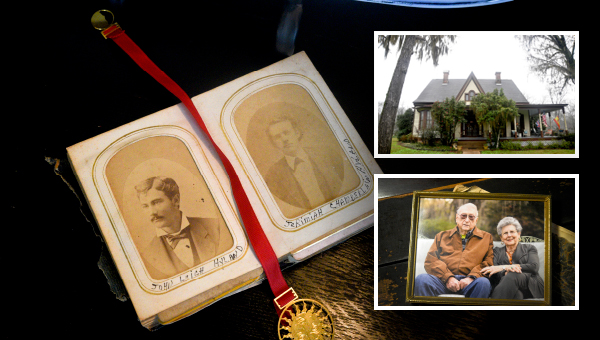 Loosa Yokena plantation has a deep, rich history and a legacy of loving owners

A patriot, a determined woman and a Native American burial ground are all pieces of Loosa Yokena Plantation’s history.

Acquired by James Hyland as an English land grant in the latter part of the 1700s, Loosa Yokena, which means “Black Dirt,” was named for the last Choctaw Indian chief in the area.

James Hyland immigrated to the area from Cole’s Creek (now Jefferson County) because it was under English rule.

“The Hylands were Tories,” Dee Hyland said, and James Hyland wanted to leave Cole’s Creek since the area was going up against his mother country.

Dee’s husband, John Leigh, is a descendant of James Hyland and the couple resides on property that has remained in the family for more than 250 years.

John Leigh and Dee, who was also born and raised in Vicksburg, met in 1958 and were married in 1959.

The home the couple lives in is a Victorian cottage and was built in 1896 by Pattie Hyland Gould Hankinson.

“Aunt Pattie was a fabulous woman. She would have been the head of the women’s movement today,” Dee said.

Not only had she managed to hang on to the family farm even through the 1880 depression of the South, but she was also, Dee said, instrumental in having a Presbyterian Church built, which was the first church in Yokena.

“She was like the matriarch of the community,” Dee said.

The home, which is surrounded by thousands of acres of land, is where John Leigh grew up, Dee said. The couple moved into the house in 1973 after the death of John Leigh’s father to help with his mother until she died in 1987.

Designed by architect William Stanton, the cottage style home has a front porch that wraps around the house. On three of the porch columns the Union Jack, a Spanish flag and an American flag are flown representing the three countries that had been instrumental in granting the property to James Hyland.

The exterior of the house remains pretty much as it was when it was built and only a few alterations have been made on the interior.

Dee said she and her husband took down a wall in the kitchen and added a den where three small storerooms behind the kitchen had been.

John Leigh and Dee have three daughters, Fawn, (Rusty Keen) who is a counselor in the Grenada School District; Jan, (Bubba Diagre) who serves as the Warren County Circuit Clerk and Leigh, (Mit York) who is a marketer for ServPro. They also have seven grandchildren, six great-grandsons and a granddaughter on the way.

The antique furniture pieces in the home are family heirlooms with each carrying its own unique history, like the crotch mahogany secretary in the foyer.

It had belonged to William Lewis Sharkey, who had been Mississippi’s first Supreme Court justice and a provisional governor after the War Between the States. Sharkey County is named for him.

In the formal living room, are family portraits, two of which are Sharkey and his wife Minerva Steele.

“John Leigh is a direct descendant of one of James Hyland’s sons, Jacob, and Jacob married Matilda Steele and this was her daughter,” Dee said of the portrait hanging over the living room fireplace.

It is thought the painting might have been done in Cuba when Sharkey served as the U.S. consul to Cuba.

Cuba was owned by Spain at the time and it appears Matilda is wearing clothing that was reflective of the Spanish culture.

Adjacent to the living room is the formal dining room.

The walls are made from beadboard, and in addition to the large family dining table, there is a buffet and china cabinet, both of which have been handed down through the years.

Back when there were many workers on the property, she said, the window would be raised so the men could come into the dining room for lunch.

“That was probably part of their salary,” Dee said, to be served a meal.

Also in the dining room is a jelly cabinet that John Leigh’s mother converted into an encased china cabinet by using pieces of an old sideboard and dining table leaves.

Another notable piece in the home is a 6-by-9 foot beveled edge mirror.

It is not a family heirloom, but it does have quite the story, Dee said.

Acquired by the couple’s youngest daughter after the owner no longer wanted it, the oversized mirror had originally hung in the oldest house of prostitution in the state of Mississippi.

“It was located on China Street in Vicksburg and operated from the 1840s until the Second World War was over in 1945,” Dee said.

After the Spanish obtained the property, John Hyland applied to Spain for a land grant, and in 1792 Spain honored his English land grant.

An original copy of the document was found in the attic of the house a few years ago. It was signed by Gayoso de Lemos, a Portuguese-born brigadier who was governing Spanish-controlled Louisiana and West Florida at the time.

When the land was eventually sold to the U.S. in 1797, they, too, honored the land grant and James Hyland was able to continue growing indigo, cotton and food crops. Hardwoods are harvested from the property now.

A small log cabin thought to have been James Hyland’s home still remains on the property as well as a garden.

“Since the 1800s there has always been a garden, and it is wonderful to garden in the same footprints of all those before me,” Dee said.

Through the years, portions of Loosa Yokena Plantation have been sold, beginning after the death of James Hyland in 1831.

In an effort to settle the estate, James Hyland’s 11 children were issued quick deeds to some of the property that they then sold to William Lewis Sharkey, which enabled them to split the monetary value of the property.

When Sharkey was ready to sell, John Gould, who would in time marry Aunt Pattie, purchased it.

After Gould’s died, Dee said, Aunt Pattie was resigned to mortgaging everything she had in an effort to hold on to the land.

Thankfully, the loans held out until she married Will Hankinson, who owned adjoining property.

This union gave Aunt Pattie the financial security she had never had before.

On the property, a Native American burial site was discovered as well as artifacts — some of which date back thousands of years.

Beginning in the late 1990s, archaeologists from the Mississippi Department of Archives were successful in placing these sites on the National Register of Historic Places, Dee said.

Some of the artifacts that have been found include a prehistoric jewelry box of stone-forged beads, hand tools for basic work and fire-cracked rock, which was believed to be an early food preparation technique.

Dr. Ian Brown, who is an archivist at the University of Alabama, has worked closely with the family. When a chronological value of the items is complete, Dee said, they will be donated, with some going to the Old Courthouse Museum.

From the drum beats of Native Americans, to the patriot who refused to fight against his homeland, to a strong-willed woman who struggled to hang on to her family’s land, Loosa Yokena Plantation’s rich history has continued.

“We have had too many weddings to count, deer hunt parties, baby christenings and all our girls and a granddaughter were married here,” Dee said.

“We are blessed to have been able to enjoy the history and this property. It is a privilege to be the caretakers for a time in history,” she said.

As businesses either close or reduce their workforce out of concern for the Covid-19 virus, more people are filing for... read more