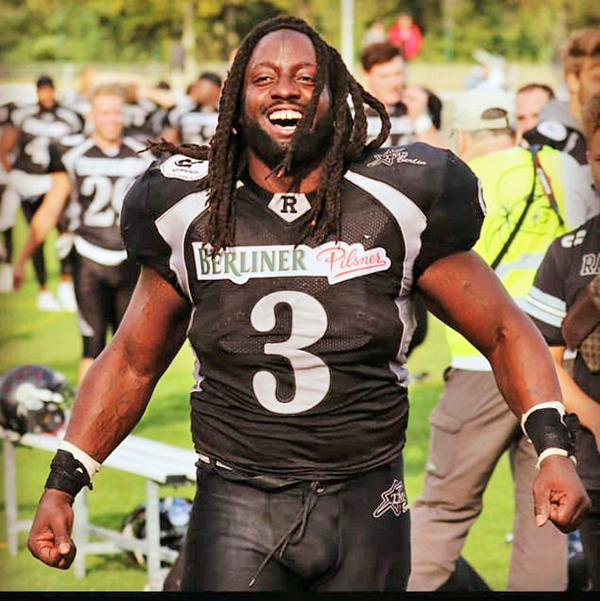 Former Vicksburg High star Rory Johnson (3) is preparing to enter his 11th and final season with the German Football League’s Berlin Rebels. The league’s season, however, has been put on hold by the coronavirus pandemic. (Photo courtesy of Rory Johnson)

This was supposed to be the week that Rory Johnson kicked off his farewell tour.

For 10 years, the former Vicksburg High and Ole Miss football star has been a standout in the German Football League. Johnson is one of the most long-lived and accomplished defensive players the league has ever seen, but he turned 34 in March and planned to retire at the end of the 2020 season.

He was going to change his number from 3 to 44, the one he wore in high school, college and early in his pro career, and hopefully lead his Berlin Rebels to a championship.
Then the coronavirus pandemic swept across the world, the season was suspended, and Johnson’s grand plans were put on hold.

“I’m supposed to retire, but if they cancel the season I’ve got to come back and play a whole other year,” Johnson said with a laugh.

Whether he does or doesn’t finish his career like he’d planned — the GFL, like most sports leagues around the world, put its season on hiatus; the preseason was to begin this week, and the season in late April — will hardly diminish what Johnson has accomplished in Europe.

In a league where most foreign players only last a season or two, Johnson has carved out a decorated career. He has averaged 74 tackles per season and has 65 sacks, to go along with 147 tackles for loss.

“I’m very proud. When I first came over here, I said maybe I’ll stay here only three years,” Johnson said from his apartment in Berlin. “Then when I came here, it just felt like family. They let me really grow. I think I’ve had a great career. A lot of the Americans, when they play defense, they always come looking for me. Some of the good players now say, ‘Rory, you’re my role model.’ I tell them I’m from Mississippi and I’m just doing what I love.”

He was a highly-recruited linebacker at Vicksburg High in 2004, was a junior college All-American at Hinds Community College in 2005, and ranked second on the team in tackles at Ole Miss in 2006.

He left college early for the NFL, but it didn’t work out. He was cut in training camp by the Green Bay Packers and New York Giants, and again following one game with the Canadian Football League’s Edmonton Eskimos. In 2010 he signed with the Berlin Rebels of the German Football League.

“For me, when I came here, this was my last shot. That’s what I always felt like. If I don’t do it this time, it’s over,” Johnson said. “That’s what I tell the guys, is why I’m so emotional, because if I never came over here I don’t know where I’d be right now. Being over here steered me to do everything the right way. Even when I was back in America, I knew if I did anything wrong I wouldn’t be able to leave the country because of my passport. I didn’t want to mess my visa up. I think that kept me out of trouble.”

Johnson made an immediate impact with the Rebels. He ranked second in the league in tackles (123) and sacks (11) as a rookie and helped the Rebels climb back to the GFL’s top division after a season in its second division. Similar to European soccer leagues, the GFL promotes and relegates teams between its two divisions based on performance.

He spent nine of the next 10 seasons with the Rebels, leaving only for the 2014 campaign to play with rival Berlin Adler before returning to the Rebels in 2015. He feels fortunate to have spent his entire career in Germany’s capital. He considers the city of 3.5 million people a second home.

“When I came here, that was the best thing for me. My second year, I took less money to come back to Berlin instead of going somewhere else because I loved the city so much,” Johnson said. “The people are just so welcoming. And then there are so many different types of people. Where I grew up, it was just black and white. Here you’ve got Turkish, and this type of person and that type of person. Our network is good. It’s a big city and I can do so much different stuff here.”

Berlin, and Germany in general, has hardly been the only place Johnson has been in the past decade. He’s taken both vacations and football-related trips all over Europe and Africa. He’s played professionally in three countries on two continents.

“I’d never have believed it. I remember being at Vicksburg Junior High and dreaming about just being big. I always knew I was good, and where it could take me to,” Johnson said. “When I first went to Canada, I was like, ‘Wow, I’m really outside of America.’ And then to come to Europe … I’ve been to London, I went to Sweden last year, I was in Italy before. It’s crazy when I think about it, being from Vicksburg, Mississippi, 61 South, you just never think that.”

COVID life in Germany
Johnson’s world travels, at least for the moment, are on hold. Like people all over the world, he’s been affected by the COVID-19 outbreak. He describes Berlin the same way many American cities look — few people on the streets, shortages of essential supplies, and a general unease.

“It’s OK in Berlin, but every country around us has been pretty bad. Right now, in Germany, there’s pretty much nobody on the streets,” Johnson said. “Berlin has 3 million people, but with the coronavirus most people are working from home so there’s nobody on the streets right now. The only people that are out are if you work at a pharmacy or construction, but only inside construction. Then if you go to the stores there’s no tissues, no toilet paper, no anything. Over here it’s been like this for more than a month now.”

Johnson has a side job in the construction business that regularly takes him out and about. He said he’s mindful of social distancing and other health precautions.

“I am worried a little bit. But I’m in a great country for something like this to happen. I’ve got great healthcare. Everything is taken care of. If something happens, I know I’ve got everything in order,” he said. “But while I’m out, I never touch anything now. Even my friends, we don’t shake hands anymore. We just dap each other up. It is scary.”

The GFL announced Friday that it will make a decision on its season around April 15. All league activities are suspended until mid-April because of public safety guidelines and restrictions.

“Everything is shut down in Germany until the 19th of April. We are expecting a decision from the government after Easter,” Carsten Dalkowski, Chairman of the German Football League, told AmericanFootballInternational.com. “The GFL is scheduled to start on the last weekend of May as things stand now. Lower leagues may start earlier. Or later. This will depend on the German government and health authorities. We will make a decision around April 15.”

Preparing for the future
Whenever things get back to normal, Johnson will embark on his final season as an active player. He hopes to add to the collection of highlight clips — many of which feature fearsome tackles — that he regularly posts on his Facebook page, while at the same time preparing for a transition to the next phase of his football life.

Johnson wants to become a coach when his playing career is over, either in Germany with the Rebels or in the United States. He has been coaching a youth team in Berlin and said he’s developed a passion for that side of the game.

“I think maybe I’ll stay here another year, but I want to come back to America and coach. That’s the goal,” Johnson said. “This past year I’ve been coaching a lot more before the coronavirus started. I’ve been coaching a youth team here and getting my practice in. The coolest thing here is the Berlin kids know me, so when I come they’re just willing to learn. There’s something about that, when you’re talking and teaching, everybody is like, ‘Yes, sir. What do you want me to do?’”

Johnson said he’s also had an offer from the Rebels to become a coach next season, and to continue working as an ambassador for the team. In recent years he’s gotten more involved with recruiting American players to come to Germany, and said he enjoys selling them on the positive things the country and the GFL have to offer.

“I actually do a lot of recruiting now. I get to talk to them, and I tell them I wouldn’t be here 10 years if it wasn’t good,” Johnson said. “I like doing the recruiting. I’m normally not a talker, but when it comes to football, that’s my love. I’ve been playing football since I was in the second or third grade, and that’s something near and dear to me. It took me all over the world. These last two or three years, I brought in four or five players from other teams and even outside of Berlin.”

The GFL regular season typically runs from late April to September. Its status for 2020, like most leagues, is uncertain.

Whatever the future holds, Johnson seemed pretty certain that it would include at least one more season with him in a Rebels uniform. He’s still healthy and in shape, and at the top of his game. He was third on the Rebels in tackles last season, with 76, and had 11 tackles for loss and four sacks.

He still wants one more season, however, to finish things on his own terms.

“I’m going to have to. I want to play,” he said. “Last year I had a good year, but I was kind of banged up. This year I worked out hard. I lost another 10 pounds or so and put on a little bit more muscle. I wanted to make sure I was ready this year.”