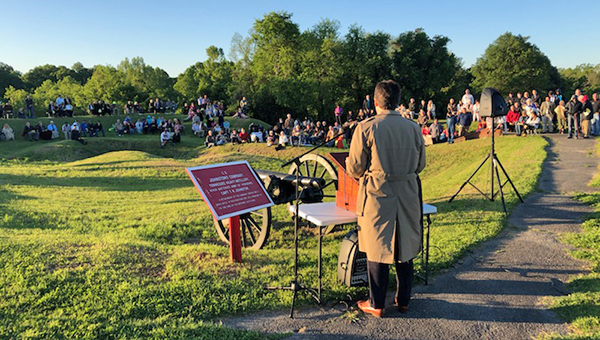 Hundreds of worshipers look on during the Easter Sunday Sunrise Service at Fort Hill in 2019. Because of the COVID-19 outbreak, this year’s service will be a drive-in service in the Halls Ferry Park parking lot on April 12 at 7 a.m. (Photo courtesy of the Vicksburg YMCA)

Even in the face of the COVID-19 pandemic, shelter-in-place orders, and fear about the future, some traditions are too important to cancel.

For the 71st year, the Vicksburg YMCA will conduct its interdenominational Easter Sunrise Service, albeit with a pandemic-fueled twist. Rather than its traditional location on Fort Hill, the service on April 12 will be conducted in the parking lot of Halls Ferry Park. Worshipers must sit in their cars to comply with the various restrictions on large gatherings ordered by state and local officials.

Vicksburg YMCA executive director Phillip Doiron said the format of the service was a suggestion by Mayor George Flaggs, Jr., and that he was happy it would go on during a time when many people cannot attend live church services.

“This is something that is special, and people have not had a church experience in several weeks, so we wanted to bring it to them,” Doiron said. “It was important to do this. It is a tradition. It is a part of Easter. I felt like we had to do this somehow. We had a lot of iterations of it, and the mayor’s idea was the perfect thing.”

The mayor’s idea was to turn the Halls Ferry Park parking lot into a drive-in church for a couple of hours. Doiron said as late as Thursday he and other organizers were looking at alternate methods of performing the service, such as streaming it on Facebook Live, or doing drive-by blessings around Vicksburg.

Then, on Friday, Flaggs called to suggest using Halls Ferry Park as a venue. The park is closed for day-to-day use during the coronavirus outbreak, but is being made available for the Sunrise Service.

“It’s a tradition of this community, and I’ve always attended it,” Flaggs said. “It’s the strongest message that can be given to people, and that is to tell the story of how in three days He rose from the dead. It was too important for us to lose that message because we didn’t have a place.”

To comply with the statewide shelter-in-place order from Gov. Tate Reeves — as well as city and county measures that mirror it — that went into effect at 5 p.m. Friday and is in effect until April 20, worshipers will be required to remain in their vehicles during the service.

Vicksburg Police Department officers will patrol the parking lot during the service to both direct traffic and ensure people remain in their cars.

“For us to make this happen, we’re going to have to get people to stay in their vehicles,” Doiron said. “Other churches are doing this, but the governor said the bad part is people are getting out of their cars and hugging and shaking hands. We don’t want that.”

The service will begin at 7 a.m. on April 12. It will be led by ministers Joe Mosley of Calvary Baptist Church and Kevin Bradley of Crawford Street United Methodist Church, while Patrick Smith provides the music.

A public address system will be set up in the parking lot, but the service will also be broadcast on radio by WVBG 105.5 FM. That will allow both worshipers in the parking lot to listen on their car radios, and those who can’t attend to listen at home.

The main parking lot used will be the one near the Halls Ferry Park tennis courts, but other lots will be used for overflow. Doiron said he wasn’t sure what kind of crowd the service would draw.

“We normally get around 200 people. They come to that service and then go to their own,” he said. “This is a wild card. I’m not sure if we’ll have a lot of people that aren’t ready to leave the house, or a huge crowd because people want to get out.”

If there is a large crowd, Doiron issued two pleas — for patience, and another reminder for people to remain in their vehicles and follow social distancing guidelines.

“You may want to allow some extra time. Be patient when you leave. We don’t want 100 cars trying to leave all at the same time. We’ll probably do a row-by-row release,” Doiron said. “Just be patient and enjoy the day.”

The effects of Covid-19 have caused a drop in business volume, but Golding Barge Lines is keeping busy the company’s... read more