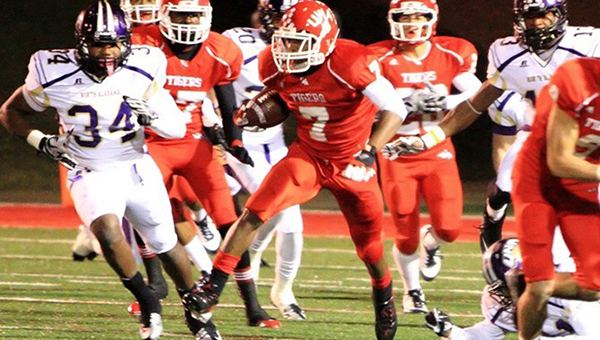 Malcolm Butler (7) breaks loose for a touchdown during a game in 2013 with West Alabama. Butler, a Vicksburg native, on Tuesday was named to the D2Football.com Division II All-Decade team forthe 2010s. (University of West Alabama Athletics)

Less than a week after he was named one of the all-time greats in the Gulf South Conference, Malcolm Butler added another prestigious honor from his college football days.

The Vicksburg native and former West Alabama star was named to the D2Football.com Division II All-Decade team on Tuesday. He was one of 50 players who played Division II football between 2010 and 2019and made at least one All-America team that were picked.
Butler was a first-team All-Decade selection, and one of only six players from the GSC picked.

Among the other GSC players was another former West Alabama player, defensive lineman Deon Lacey. Lacey was the GSC’s Defensive Player of the Year in 2011.

Butler played his final two seasons of college football at West Alabama, after two seasons at Hinds Community College. He broke up 18 passes and intercepted two as a senior in 2013 on the way to earning All-Gulf South Conference and Division II All-America honors. He had seven career interceptions at West Alabama, along with 94 total tackles.

After college, the former Vicksburg High star signed as an undrafted free agent with the New England Patriots. He rocketed to NFL stardom during his rookie season by making a game-sealing interception at the goal line in the final minute of a 28-24 win over Seattle in Super Bowl XLIX.

Butler won another Super Bowl with the Patriots two years later, and helped them reach a third in 2017. He left New England after that season to sign with the Tennessee Titans as a free agent.

In six NFL seasons he has played in 84 games and has 13 career interceptions.

“I had great coaches (at West Alabama). Great people over there that made me want to go to that school. And I just knew that when I went there I had to handle business,” Butler said last week, after his selection to the GSC Hall of Fame was announced. “I was given a second chance. My hunger and motivation were off the meters. I’m grateful to West Alabama and the GSC. I found myself.”