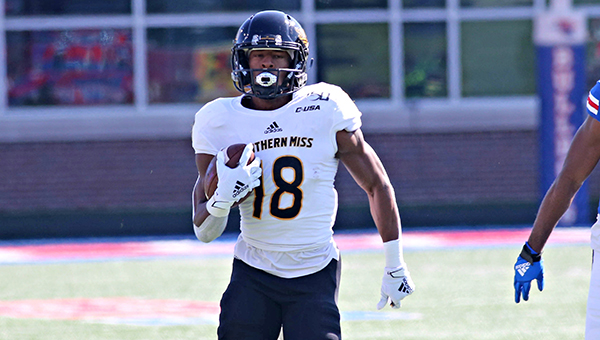 Southern Miss football player DeMichael Harris, a Vicksburg native, returns a kickoff for a touchdown against Louisiana Tech last season. Harris is among hundreds of players hoping to hear their name called in the NFL draft later this month. (Southern Miss Athletics)

DeMichael Harris had plenty of highlights during his senior football season at Southern Miss.

There was the 100-yard kickoff return against Louisiana Tech. Two 100-yard rushing games. Multiple-touchdown games against UTEP and North Texas, and enough big plays to showcase his elite speed.

The COVID-19 pandemic led colleges to cancel pro day workouts and NFL teams to pull scouts off the road in the lead-up to the NFL draft scheduled for April 23-25. For players like Harris, who were projected as late-round picks or free agents, it has cost them their final — and perhaps best — chance to get in front of scouts and make the kind of impression that might get them selected.

“If I would’ve had an opportunity to go through pro day and hit the times I should’ve, my agent and I were thinking late round pick. Rounds six or seven. But with the given circumstances it’ll be more than likely the free agent route,” said Harris, a Vicksburg native and former St. Aloysius star.

Harris’ prospects of landing on an NFL preseason roster are not exactly bleak. If he’s not selected in the seven-round draft, Harris said he expects to get a free agent offer. He said he’s had contact with a half-dozen teams, including the NFC champion San Francisco 49ers and perennial powerhouse New England.

The free agent route would bring less job security, but a better opportunity to find the right fit for his skill set.

Harris is a versatile running back who also returned kicks and played wide receiver during his college career. In two seasons at Southern Miss he had 1,714 all-purpose yards — 621 rushing, 538 receiving, and 555 on kickoff and punt returns — and 11 touchdowns.

“I definitely feel like that’s an advantage, being in a free agent situation. Before making a decision I can evaluate each scenario and look for the best fit,” Harris said.

Harris, though, might have been a player who benefited from a pro day workout in which players go through various drills and exercises. He has track star speed — in high school at St. Al he ran the fastest 200-meter time in Mississippi high school history and clocked 10.55 seconds in the 100 meters — that could have wowed scouts and raised his draft stock.

Southern Miss’ pro day was scheduled for March 31, but canceled along with dozens of other similar events at other colleges after the coronavirus outbreak kicked into high gear in the United State.

Harris will instead rely on his game tape and the work of legendary agent Bus Cook to get an opportunity.

“I feel like my film speaks for itself, and it displays my speed and other abilities well,” Harris said. “Of course it would’ve helped if I would’ve got an opportunity to pass their eye test, but I still feel like my chances of getting that next level opportunity are pretty good. I just have to play the waiting game now.”

However the draft turns out, Harris added that he was excited to have an opportunity to play professional football.

“It’s a blessing and a testament to all the hard work that I’ve put in for the past 14 years, so I’m very excited to see what this next chapter holds,” Harris said. “I definitely didn’t do this by myself and I would like to thank my family, coaches and teammates that played a part in my development as a football player.”

Less than a week after he was named one of the all-time greats in the Gulf South Conference, Malcolm Butler... read more