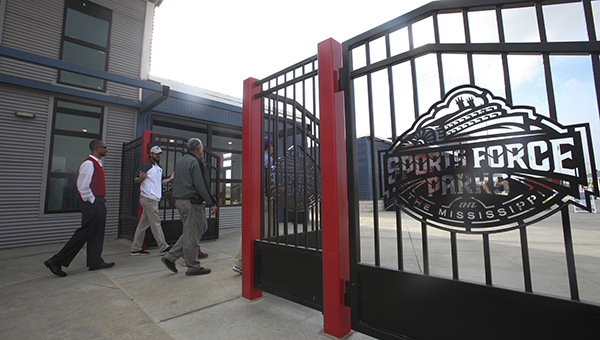 Sports Force Parks on the Mississippi has reopened for local teams to practice on, but remains closed for weekend tournaments under guidelines issued by Gov. Tate Reeves. (File/The Vicksburg Post)

City will give Sports Force Parks a break on contract obligations

Sports Force Parks Vicksburg is a subsidiary of Sports Fields Inc. of Canton, Ga. The company’s contract with the city includes a clause called a force majeure, which is a provision that protects the company if it is unable to fulfill its contractual requirements because of circumstances beyond its control.

When the city and Sports Force Parks Vicksburg agreed to a contract in May 2018, the company agreed to meet certain benchmarks in the number of teams its tournaments would bring to the city.

According to its contract with the city, the company was expected to bring in from 435 to 585 out-of-town teams during 2019-20, its first full year of operation. According to its last quarterly report for the first year, 775 teams participated in games at the park. Its goal for 2020-21 was projected at 610 to 815 teams.

Mayor George Flaggs Jr. said Sports Force Vicksburg officials notified the city the company would be unable to meet its benchmark “and we are going to honor that.”

“We are re-evaluating that section because of the unforeseeable issue of the virus,” Flaggs said. “We will probably err on the side of safety first and forgive them for the loss of revenue. There is no way they can make those numbers; it’s too many days.”

He said Wednesday the company exceeded its initial goal.

“We’re erring on the side of safety, and I applaud them for closing the park,” Flaggs said.

According to the contract, if the city decided to find Sports Force Parks Vicksburg in default for not reaching its benchmark, the city could terminate the agreement and take action to recover damages arising from the default.

Sports Force Parks on the Mississippi began operation in February 2019, with the first Border Battle softball tournament. When park officials held a ribbon-cutting ceremony in May 2019, the park had already hosted 43,000 visitors, and 431 tournament teams from across the South had competed in more than 1,500 games.

In December, Flaggs said the company’s report to the city indicated the complex had 135,000 visitors and brought $12.4 million to Vicksburg’s economy.

“That is phenomenal,” he said after announcing the report at a meeting of the Board of Mayor and Aldermen in December. “I still contend that Vicksburg is on its way and you ain’t seen nothing yet.

“We’ve got to exceed our expectations for next year and continue this phenomenal growth for the city of Vicksburg. We can do it. I think we’re going to do it.”

Park officials on March 18 postponed the Battle on the Border softball tournament that was to have 60 teams from across the South participating after the USSSA, which was the sanctioning body for the tournament, halted all tournaments under its umbrella.

The announcement led some teams to decide against playing in the tournament, officials for Sports Fields said. Since then, other sports sanctioning bodies have halted activities out of concern for COVID-19, and the city’s emergency orders have stopped all activities locally.

“Everything is postponed,” said Sports Fields Inc. president and CEO Brian Storm. “We are open for business and waiting for the governor’s order and the mayor’s order and we will be back rolling, maybe with some changes. We miss our guests.”

While the park is a public space, Storm said, it is closed and company officials are working from home.

Storm said he has received tremendous interest from teams that want to play at the park and plans are to reopen when government and health officials allow it.

“We’re sorry for all the families who cannot be at the park, but as they say, this too shall pass,” he said. “It’s disappointing for everyone across the country to see this happen, but people I have talked to in sports are ready to get back to playing.”

City to require temperature screening, other restrictions as it prepares to welcome employees back

When city employees report back for work, they will have to have their temperatures taken before going on the job.... read more