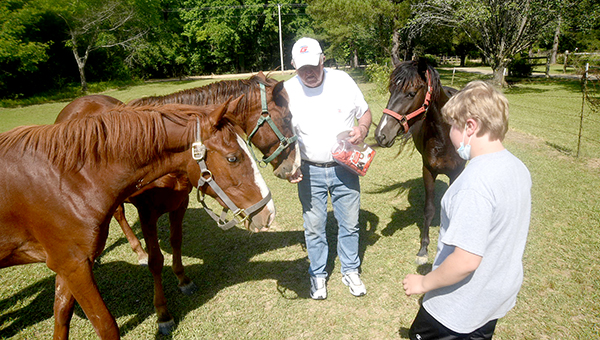 In January 2019, the city of Vicksburg Animal Control seized nine malnourished and neglected horses on a property on Standard Hill Road.

Thanks to a recent adoption by a local resident, only two of those horses remain at the shelter.

Vicksburg Warren Humane Society Director Georgia Lynn said she started adopting the horses in the spring of 2019 after they had gained some weight.

Local resident Robert “Bob” Gordon was one of the first to adopt one of the horses that spring. Lynn said he adopted one of the colts so an old horse he already owned would have a friend in his pasture.

“When (The Vicksburg Post) ran the article, he saw it and realized we had some more,” Lynn said. “The two that we adopted to him were broken to ride.”

The article Lynn refers to is The Post’s “Adopt A Pet” promotion that runs in the newspaper each April in an attempt to find shelter animals forever homes.

“The horses have been a long, long process,” Lynn continued. “Horses don’t get adopted usually. First off, normally when I get them they aren’t even adoptable. They are next to death.

“People get horses and they don’t realize the expense and the cost that comes with them,” she continued. “I have had people who say they want a horse to put in their backyard… If you have one horse and you aren’t going to supplement with hay and grain, you need eight acres per horse. So if you have three horses, you need 16 acres.”

Gordon adopted the second pair of horses for his 11-year-old grandson, Hayden.

“I have had horses ever since I was 13 years old, and I just thought it would be good for him to have one, and the horse we had was getting too old to ride,” Gordon said.

“The first horse we adopted was not broken (to ride),” he continued. “We are teaching him to lead. The next two that we got, there was a young lady (Meg McDaniel) at the Humane Society and she had been riding them, so I’ve had my grandson on the back of both of them.”

Gordon said McDaniel is going to come out to his land to help Hayden with riding. The Gordons have 30 acres.

“When we adopted the first one they had named him Blue and he was poor but now he is fat as a rat,” Gordon said. “These other two, they have taken good care of them down there, I have to give them credit. They love their animals at the Humane Society.”

After the horses were seized in January of 2019, they were taken to the Vicksburg Warren Humane Society to be housed for the city. Lynn recalled what it was like caring for the horses once they arrived.

“It was freezing cold in all the elements of the weather,” Lynn said. “It was absolutely horrible. It was raining and it took my whole staff to feed. We had to stand there to make sure everybody got all their food. They were so hungry they would fight over the food.”

The Vicksburg Warren Humane Society received $1,000 per horse for housing them for the city of Vicksburg.

Lynn said it was bittersweet seeing the horses go to their new forever home.

“Yeah, I cried a little bit,” she said. “But they were here to go to a good home, and they are going to a good one with lots of grass.”

The Vicksburg Warren Humane Society has two horses left that are up for adoption. Of the two left, there is a mother horse who is broken to ride and her 14-month-old baby.

To support the Vicksburg Warren Humane Society’s efforts, monetary donations can be made by mailing payments to 6600 Highway 61 South, Vicksburg, MS 39180.

Pandemic has slowed efforts, but Friends of the Vicksburg Bridge are still pushing

An organization dedicated to permanently opening the road deck of the Old Mississippi River Bridge to pedestrians is continuing its... read more