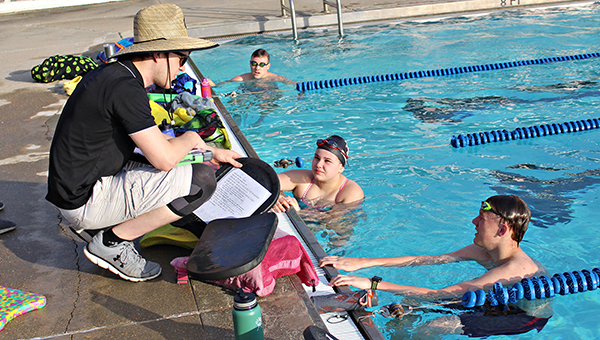 Vicksburg Swim Association coach Frank Rapin, left, talks with Katie Wallace and Austin Norwood during a practice at City Pool in May 2019. The VSA club team has not had its swimmers in the water since March 4 because of the COVID-19 pandemic. (File/The Vicksburg Post)

How does a swim team work out and build team chemistry when it can’t swim?

The Vicksburg Swim Association’s members have not been in the water since March 4, just before the COVID-19 pandemic led to a nationwide shutdown of sports, large gatherings and workout facilities. For two months they’ve tried to stay in shape both physically and mentally by utilizing a variety of creative techniques.

Even when beached, the Killer Whales have stayed busy, coach Frank Rapin said.

“There was a transition out of the normal. We started to utilize Zoom. We added in-person dry land exercises as well, with remote thermal temperature taking and other precautions. We’ve been doing things like food contests to design swimming-themed items,” Rapin said. “Really trying to keep people connected is the main thing.”

Perhaps the biggest challenge for Rapin and his swimmers has been dealing with the lack of pool time. Swimmers often utilize what are called dry land exercises in their training — things such as running, sit ups, push ups and other basic exercises that can be done outside the water — but rarely for as long as this.

To mix things up and keep young swimmers engaged, Rapin has incorporated some unique techniques to complement the basic ones. Those range from making baked goods to online team meetings that border on group therapy sessions.

“We have a sequence of dry land drills. We do yoga, and some on-land drills, and talk about what we’re experiencing out of the water,” he said. “The kids have very much enjoyed the food challenges.”

Although dry land exercises can keep swimmers in shape, the technical skills and speed acquired through time in the water are harder to maintain.

“Swimming is a sport that consistency in the water is a factor. We all anticipate the transition back to the water is going to take some time,” Rapin said. He added, however, that he’s trying to have his team ready to jump back in as soon as it’s safe to do so. “We still have done things like season goals. I try to keep in the mindset, without promising anything, that pool time will be available tomorrow and keep that structure.”

When the VSA swimmers will be able to get wet again is unclear. The club team normally trains in the indoor pools at the Vicksburg YMCA and Wyatt’s Gym during the winter and spring months, and both facilities were closed for much of March, April and May in accordance with state and local restrictions intended to curb the spread of COVID-19.

The Vicksburg YMCA reopened its pool late last week, and Wyatt’s will be allowed to reopen this weekend as some of the restrictions are loosened.

The VSA normally transitions to the outdoor City Pool for the summer months, but it’s unclear if that will be an option in 2020. The facility has not yet been cleared by the City of Vicksburg to reopen, and its operations might be limited if it does because training time for its staff has been greatly reduced during the spring.

City Pool normally opens on Memorial Day weekend, and the VSA hosts a large meet, the Stamm Family Invitational, at the facility the first weekend in June. Rapin said that the meet — which draws as many as a dozen teams and several hundred swimmers from Mississippi and Louisiana — has been postponed until later in the summer.

A new date for the meet has not yet been set, although Rapin is eyeing late June or July. USA Swimming, the sport’s governing body, is not sanctioning any meets until at least May 31.

“It certainly has to be delayed. USA Swimming is not sanctioning any traditional meets,” Rapin said. “We’re certainly hopeful that later in the summer we can have some of our meets. Right now, we just want to get back out and into the water.”

Rapin said there is a chance that the Stamm Family Invitational could become a “virtual meet” where swimmers compete in their own pools and then report the results to the meet host for scoring. The format has been used in a number of places over the years, either as a gimmick or when circumstances such as bad weather make traveling to a meet impossible.

“That would mitigate the risk of crowds. That is an option,” Rapin said. “We’re hopeful that the virtual format will work out.”