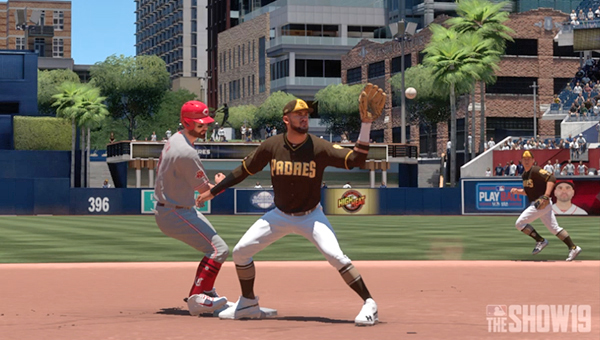 “MLB The Show” is one in a long line of sports video games that have evolved over the past 40 years, from pixelated blobs to sophisticated razor-sharp graphics. (Ernest Bowker/The Vicksburg Post)

Sports column: Sports video games have been with us a long time

Like a lot of Americans, when the college and pro sports leagues went on their COVID-19-induced walkabout this spring, I filled their absence with my own leagues.

A few weeks back I fired up my Playstation 4 and dove into a franchise on MLB The Show. The 2019 San Diego Padres finished 70-92 in real life, but led by former Mississippi State star Hunter Renfroe and my astute managerial skills their virtual counterparts are 78-28 and have a 22-game lead in the NL West at the trade deadline. We feel good about our playoff chances.

As I’m playing the games, the sports writer in me comes out and I sometimes have virtual press conferences in my head. Why did you leave that pitcher in so long? Why didn’t you pinch-hit for that guy in the seventh inning?

It reminds me just how seriously we take these games sometimes, and with good reason. They’ve been a part of our lives for decades. Where kids of the 1960s, 70s and 80s collected baseball cards or played Strat-O-Matic or APBA card games, kids from about 1985 to 2020 have made their biggest connection to big-time sports through playing video games.

I’ve been playing sports video games for more than 30 years now, from the awful 4-bit blobs of the Atari 2600 to the razor-sharp graphics of the PS4. There have been some good ones and some bad ones, some classics I never got to and some I spent way too much time with.

Back in the 8-bit Nintendo days, “Bases Loaded” and “RBI Baseball” were great, but the two games I really got into were “Major League Baseball” and “Baseball Simulator 1.000.”

“Major League Baseball” was kind of a clone of “RBI Baseball.” The latter has had a recent resurgence and featured all of the players. The former had all of the teams — but no players, just their numbers, because of a licensing agreement — and allowed you to customize your lineups. Loading up two teams with the 1987 All-Stars led to some fierce neighborhood battles.

“Baseball Simulator 1.000” had similar levels of customization and more, but no license. Its gimmick was its Ultra mode, where you could create teams with literal superpowers. Imagine being able to stop a pitch halfway to home plate, throw a 200 mph fastball or hit a ball that exploded when it landed, and you have the gist of it. This game included a season mode that kept stats. Its only downfall was that games between two computer teams took about 10 minutes to simulate. I got a lot of reading done in the summer of 1990 while playing that game.

My NCAA Football coaching career on the PS2 is legendary. I’ve been a modern-day Bear Bryant while leading Arizona State and South Carolina to multiple national championships. My 2039 Iowa State Cyclones have been waiting for me to come back for spring practice for a few years, though. I might have to check in and see how they’re doing.

I feel fortunate to have lived through the evolution of these games. I’ve brawled in “Ice Hockey” on the NES, won the Super Bowl in “Tecmo Super Bowl” and “Madden,” blown up opponents in “NFL Blitz,” won NBA and NCAA basketball championships, and had some spectacular NASCAR wrecks. It’s been a fun ride.

Now, if you’ll excuse me, the Padres are about to take the field. It’s time to sock some pixelated dingers.

Ernest Bowker is the sports editor at The Vicksburg Post. He can be reached at ernest.bowker@vicksburgpost.com

For six years, Wilson Palmertree was a staple of St. Aloysius’ golf team. He was the next link in a... read more