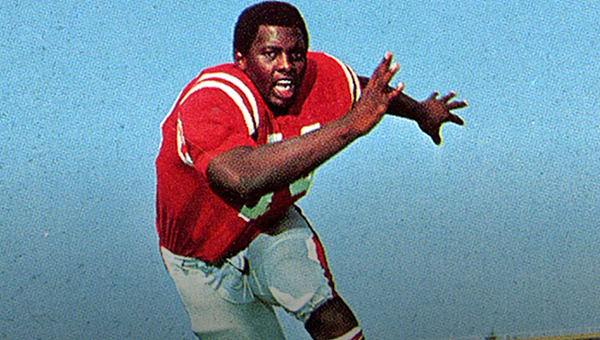 OXFORD — Ole Miss lost one of the university’s groundbreaking students and iconic football players with the death of Robert Jerry “Ben” Williams, Jr., on Monday,

Williams, 65, died of natural causes at St. Dominic Memorial Hospital in Jackson, the university said in a release. Funeral arrangements are still pending.

Williams, who was affectionately known as “Gentle Ben”, joined James Reed in 1971 to become the first African-American student-athletes to sign football scholarships with Ole Miss. The Williams-Reed Football Foyer, located in the Olivia and Archie Manning Athletics Performance Center, pays tribute to the contributions of Williams and Reed.

The Yazoo City native was was a four-year letterwinner for the Rebels and the first African-American Ole Miss football player to earn All-America honors, drawing a first team distinction in 1975. Williams was also a three-time first team All-SEC selection and member of Ole Miss’ Football Team of the Century.

“Gentle Ben’s impact on our university, the SEC and college football as a whole is immeasurable,” Keith Carter, Ole Miss Vice Chancellor for Intercollegiate Athletics, said in a statement. “Ben not only helped break the race barrier for our football program but was also the first African-American student to be elected by the student body for what is now known as Mr. Ole Miss. He was a great person, player and ambassador for our university and will forever be beloved by Rebel Nation.”

Williams owns the program record for career sacks with 37, including an Ole Miss single-season record of 18 in 1973. Over his career, he amassed 377 tackles, including a career-high 116 as a senior.

Williams participated in the 1976 Senior Bowl, as well as the Coaches Association All-America Bowl and the 1975 East-West Game.

After Williams earned a Bachelor of Business Administration degree in 1976, the Buffalo Bills selected him in the third round of the 1976 NFL Draft with the 78th overall pick. He was the first African-American athlete from Ole Miss to be chosen in the NFL Draft.

The Rebel legend went on to have a 10-year NFL career (1976-85) with the Bills, which included a 1983 Pro Bowl selection. Williams saw action in 147 games for Buffalo, including 140 starts. He retired as the franchise leader with 45.5 career sacks and was one of 50 players named to the franchise’s 50th anniversary team.

A businessman and owner of LYNCO Construction Company in Jackson, Williams served his family, community and alma mater by giving his loyalty, time and financial support.

At Ole Miss, he provided leadership in several crucial areas by serving as a member of the Black Alumni Advisory Council, The University of Mississippi Foundation Board of Directors and M-Club Board of Directors; and as chair of the Minority Scholarship Endowment fund-raising efforts.

In his community, he was active in the Easter Seals Society and the Multiple Sclerosis Association. Professionally, he was a member of the Association of Building Contractors and a recipient of the Ralph L. Wilson Leadership Award.

The Robert Ben Williams Minority Scholarship Endowment, which supports scholarships awarded for academic excellence, was established in 1992 to provide assistance for young Mississippians or lineal descendants of University of Mississippi alumni. Formerly known as the Minority Alumni Scholarship, this was the first fund to be established by the university’s African-American alumni.

A couple of months ago, Jalen Davenport was minding his own business, lifting weights during practice with Warren Central’s powerlifting... read more