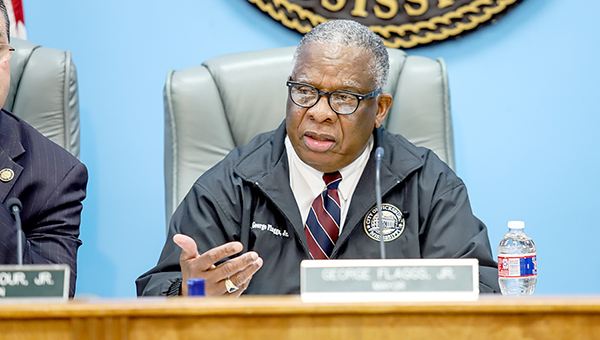 He discussed the city’s future in the wake of the COVID-19 virus at the board’s meeting Monday. His comments followed a 20-minute executive session where the board discussed his proposed reorganization plan.

Flaggs said the combination of sales tax revenue projections for April and May, the possibility of financial help from the Legislature and the federal government “and us doing some things, we believe we can run this city without making any drastic decisions about employees.

If the projections hold and the Legislature approves an aid package, he said, “We won’t have to have massive layoffs or furloughs or any of the options I talked about in the past. I think we can make it; what we have to do now is encourage people to shop local and go to restaurants. We’ve turned the corner; it’s up to us now.

“I’m cautiously optimistic that with the help of the state and federal government we can close the gap,” he said after the board meeting. “But I cannot verify anything until at the latest, June 15. I need that sales tax revenue.”

City officials have been concerned about the city’s financial picture since the emergency declaration caused many businesses in the city to close out of concern for the virus. Initial projections indicated the city may have a projected $2.8 million revenue shortfall because of the lost business.

The city is expected to have its April sales tax reimbursement from the state Department of Revenue by June 15. Flaggs also hopes the Legislature will have passed an aid bill by then.

He said based conversations he’s had with some legislators, “they seem like they’re committed to helping us restore some of the revenue loss from taxes because the CARE Act does not.”

Also, he said, there is a bill in Congress that would help local governments recover some of the lost sales tax.

The State and Municipal Assistance for Recovery, or SMART, ACT co-sponsored by U.S. Sen. Cindy Hyde-Smith (R-Miss.) would provide $500 billion to help mitigate the need for layoffs, tax hikes, and interruption of essential services.

The bill’s flexibility would be applied retroactively to the Coronavirus Relief Fund in the CARES Act.

The money would be divided into three funding programs and distributed by a formula based on population, COVID-19 infection rates, and revenue loss.

Flaggs said people shopping local may also have a positive impact on sales tax revenue, pointing to the activity at open retail outlets and grocery stores.

“It is evident by the numbers and the taxes that staying at home — staying at home and sheltering in — works,” he said. The tax revenue from the city’s large retailers and grocery stores, he said, “May have bailed us out, because we don’t have a retail market except downtown.”

Flaggs was expected to present a reorganization plan for city government at Monday’s meeting. The plan announced May 5 included laying off 12 percent of the work force and a 20 percent across the board pay cut if the city did not get any financial relief. After the board’s meeting Monday, that plan is on hold until June 15.

According to information from the city, some employee reductions have already been made. Four positions have been eliminated and four employees have retired. He anticipates other employees may retire and others leaving the city for other jobs.

“And we’re going to look at whether or not we’re going to continue that job or their position, he said. “The cross-training has worked; that’s one of the reasons we can do what we’re doing, because we’ve been able to effectively qualify employees.”

Regardless of the city’s financial situation, Flaggs said, he believes the city will be able to provide its services at the least cost to the taxpayers, “Without raising any taxes, without bankrupting anybody, without drastically cutting employees, because we’ve looked at the numbers.”

The decisions the board has made and what it plans to do in the future Flaggs said is, “In the best interests of the city and it won’t drastically upset this city,” he said. “It’s the most positive thing we can do going forward.

“I think we’re going forward in the right direction,” he said.

Vicksburg Police Officer Matthew Barnes and Warren County Sheriff’s Deputy Dustin Keyes are among the best of the best. The... read more