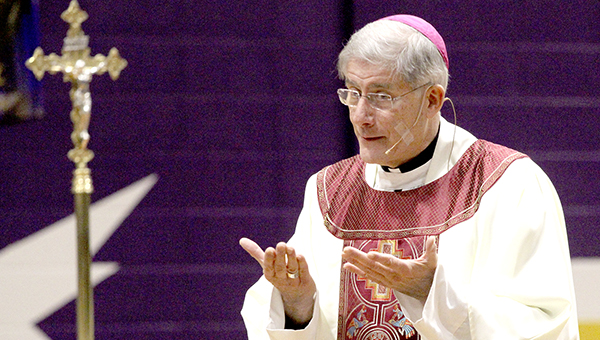 Mass within the Catholic Diocese of Jackson to resume

Catholic churches in the Diocese of Jackson — including those in Vicksburg — will resume Mass next weekend, the feast of Pentecost, according to a recent letter from Bishop Joseph Kopacz.

Pentecost is a major festival for Christians and commemorates the descent of the Holy Spirit on the apostles after the crucifixion, resurrection and ascension of Christ, marking the start of the Christian church’s mission to the world.

Kopacz suspended Mass at all parishes in the Diocese March 24, and since then pastors have been streaming services through Facebook.

“Realistically, we know that we will not be returning to normalcy on Pentecost Sunday,” Kopacz said. “This pandemic will not be going away anytime soon. Based on the capacity of our churches we will be welcoming back smaller congregations under rigorous protocols that will be consistently applied in all our parishes.

“Just like the airlines that do not deviate one iota on each flight from the stated mandatory safety measures before taking off, we too want to strive for excellence with regard to safety protocols so that we can worship with peace of mind and a heart open to the sacred heart of the Lord,” he said.

Because the dispensation from the Sunday obligation remains in effect, Kopacz said, many churches will continue streaming at least one weekend Mass, and spiritual communion will be encouraged for those who are vulnerable due to age or existing health conditions.

“Likewise, the dispensation will allow many more people in our parish communities to attend Mass on weekdays lessening the logistical challenges on the weekend,” he said.

“I thank the leadership throughout our diocese over these past two months who have informed every decision along the way through prayer, conversations and patient listening,” he said. “Through it all, the common good of our parish and school communities and the general population throughout our state was the governing principle.”

During a conference call Thursday, county elected officials and department heads started the discussion on not just when, but how... read more