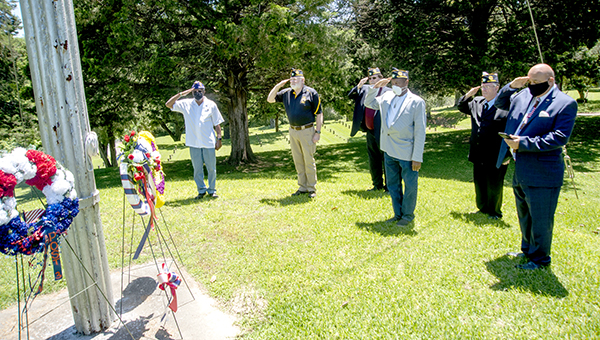 The afternoon sun was high and a cool breeze came off the Mississippi River as six men stood at the flagpole in the National Cemetery at the Vicksburg National Military Park to honor those who died serving their country.

The wreath-laying ceremony at the cemetery was a quiet affair this year, the result of concerns over the COVID-19 virus, which forced organizers of Vicksburg’s annual Memorial Day observance to modify their program.

There were no crowds to share in the prayer for the fallen. No honor guard giving a 21-gun salute to honor their service, no trumpeter playing taps. Just members of American Legion posts 3 and 213 and the Military Order of the Purple Heart solemnly placing their wreaths.

Like other components of this year’s observance, organizer Willie Glasper said, the wreath-laying was filmed Wednesday to be broadcast on Memorial Day on VTV, the city’s local access channel, and the city of Vicksburg’s Facebook page along with a speech by Glasper and comments from Mayor George Flaggs Jr.

Glasper said the wreath-laying, like the other elements of the city’s Memorial Day observance, began 39 years ago.

“We had nothing,” he said. “There had been a 10-year gap since we last had it. So I went to the Mayor’s office and asked permission for a parade.”

Glasper and the American Legion Posts worked together to produce the observance that has now become an annual event.

He said officials with the Military Park selected the flagpole site that overlooks a section of the cemetery.

“This is the general spot,” he said. “The Park selected it because it would be more conducive for the spectators who were coming. We started using this about three or four years ago. Before, we used to go to the different marked areas and put it on an unknown soldier’s grave. This, (putting the wreaths at the flagpole) is symbolic of that.”

He said Wednesday’s wreath-laying went ahead despite current gathering restrictions because “This year we didn’t want to let the community down or let the soldiers down by recognizing Memorial Day. It would give us a recognition of our area war dead, and that’s significant.”