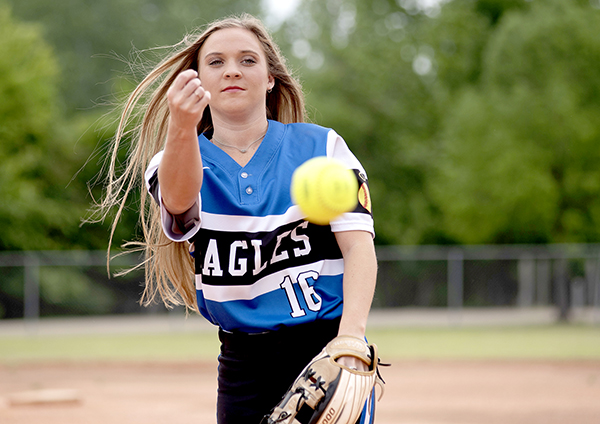 It’s been a few years, and the game meant nothing, but the memory remains vivid for Chandler Ellis.

It was a simple summer scrimmage when she stepped into the batter’s box to face a young pitcher named Hannah Embry. Ellis was on her way to a stellar college softball career in which she played at Mississippi Valley State. Embry was a sixth-grader just breaking onto the scene.

Ellis never had a chance.

“She struck me out,” Ellis said. “I watched her throw this beautiful strike right down the zone and just walked off. Now seeing her as a senior and she’s accomplished a lot. It’s great. She’s a hard worker, so it’s deserved.”

Ellis’ experience speaks not only to Embry’s skill, but her longevity. Embry is now a graduating senior who has dominated the Mid-South Association of Independent Schools’ softball scene for seven years as Porter’s Chapel Academy’s primary pitcher. Ellis was her coach this season.

Together, they helped the Lady Eagles reach the MAIS Class 2A championship series — they lost in three games to Glenbrook — in the deepest postseason run in school history. Embry capped off her stellar high school career by leading the team both in the circle and at the plate, and earned The Vicksburg Post’s softball Player of the Year award for the second time.

Embry also won the award as a freshman in 2017.

“It feels good knowing everybody is relying on you. That you’re good enough that people are going to rely on you, and you’ve worked hard enough,” Embry said.

Embry has been PCA’s primary pitcher since she was in sixth grade, and a dominant one since eighth grade. Over the last five seasons, she pitched 670 1/3 innings and had 760 strikeouts.

Ellis, herself a pitcher in high school and college, said Embry had an intangible quality that made her successful.

“She never showed emotion,” Ellis said. “She’s just a force in that circle. No emotion. She had it in her head, which is what a pitcher needs to think, that, ‘I’m better than the batter and I’m going to strike you out.’”

Embry also led PCA in batting, with a .544 average, with 14 doubles, five triples, 28 RBIs and 32 runs scored. It was the third consecutive season in which she hit .500 or better.

The Lady Eagles won the District 5-2A and South State tournament championships, as well as seven consecutive postseason games before running into Glenbrook in the Class 2A finals. It was the first time they had won South State since 2005.

Embry said the team’s success, as much as her personal success, was the most enjoyable part of the entire run.

“It was fun. I think our team was closer than it’s ever been, like the relationships with everybody. We used to have groups, and we were like one big team this year,” Embry said. “We’ve usually made it to the first two games of state. It felt good to finally make it to the state championship. I wish we would have won, but it was still good.”

Embry signed with Pearl River Community College in November, and added that the drive to earn a scholarship pushed her.

“I tried to get better because I knew I was going off to college and the competition is going to be better. I’m trying to work harder because I know you also have to earn your spot in college, because there’s going to be more players,” she said.

PCA retired Embry’s No. 16 jersey after the 2019 season, which she said was another career highlight. It’s not the last time she’ll wear it, though. Pearl River recently handed out numbers, and she got No. 16 for her college career as well. She’s ready to make it her own at PRCC, just as she did at PCA.

“We started our workout two weeks ago, and we get a workout every day. It’s a 35-day challenge, and we’re starting that. I got my number yesterday,” she said with a smile.