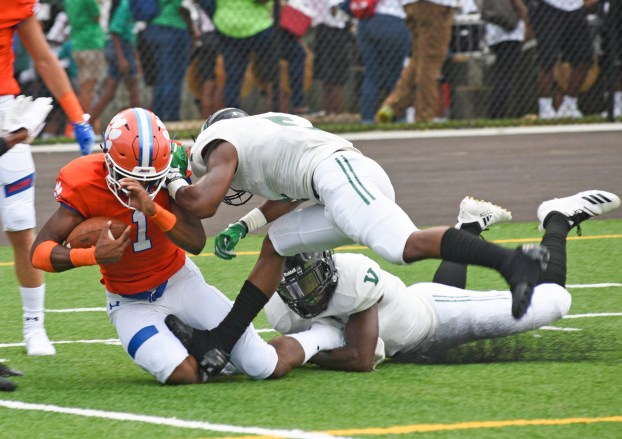 Madison Central quarterback Jimmy Holiday (1) is tackled in the end zone by Vicksburg High defenders during the 2019 Red Carpet Bowl. The teams are scheduled to play in this year’s Red Carpet Bowl as well, Aug. 21 at Warren Central. (Courtland Wells/The Vicksburg Post)

The Red Carpet Bowl has endured a lot of challenges in its nearly 60 years of existence.

It was played in 1963, the day after the assassination of President John F. Kennedy. It took a year off in 1975 — no one remembers why — and again in 1986 when no teams wanted to play in it and came back the following year both times without missing a beat.

It survived the transition from a late-season bowl game to a season-opening extravaganza, and a first-ever rainout in 2018.

As of right now, Red Carpet Bowl chairman Mark Buys said, it will survive the COVID-19 pandemic as well. Buys said plans are moving ahead for the doubleheader featuring Vicksburg vs. Madison Central and Warren Central vs. Holmes County Central on Aug. 21.

The game might look a little different. It will be held at Warren Central’s Viking Stadium for the second year in a row because of construction work being done at Vicksburg High’s Memorial Stadium. Depending on how state and local health guidelines — as well as those of the Mississippi High School Activities Association — change between now and August, ticket sales and attendance might be limited.

But as long as football is allowed to be played, Buys said it will be played.

“We are a little anxious about whether we’ll be able to play,” he said. “But we are planning to have the game whether it’s in August or later in the fall if they delay the season, or whenever they start.”

The Red Carpet Bowl always carries a special significance as the start of a new football season, as well as the unofficial start of a new sports year.

This year, a game that is played as scheduled on Aug. 21 carries even more symbolic weight.

We’ve spent two months in the void so far, locked down in our own homes, waiting anxiously to escape like Andy Dufresne tunneling out of Shawshank Prison. Crawling through five months of foulness and coming out clean on the other side to find a new high school football season that begins exactly on time would be a significant emotional victory for us all.

It would also help maintain a Vicksburg tradition that does a lot of good. A total of nine scholarships worth $750 each were distributed to graduating high school seniors this year.

The scholarships would be awarded regardless, but the value and number each year depends a lot on whether or not a football game is played that allows the committee to replenish its fund. Missing a year would not be fatal to the game, but it certainly wouldn’t help.

So let’s all keep our fingers crossed that the world keeps trending in a positive direction this summer. High school football might not seem like a big deal in the grand scheme of things. It might not seem like something we need. When it returns, however, we might find out we needed it more than ever.

It’s been a few years, and the game meant nothing, but the memory remains vivid for Chandler Ellis. It was... read more