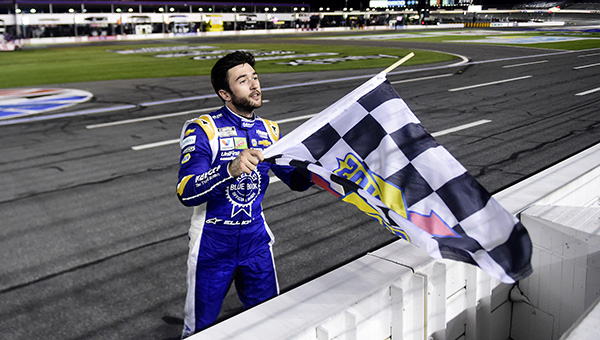 Chase Elliott ends frustrating week with a win at Charlotte

Elliott raced to his first win of the season Thursday night in the rain-delayed event at Charlotte Motor Speedway to close a frantic 12 days for NASCAR. The event, postponed Wednesday night, was the fourth Cup race since the series resumed racing May 17.

Elliott had two frustrating losses in that span.

“Man this is a tough week, we’ve had some tough losses,” Elliott said from the frontstretch.

He was trying to race for the lead at Darlington Raceway last week when Kyle Busch wrecked him, and a caution with two laps remaining Sunday night in the Coca-Cola 600 at Charlotte cost Elliott the victory. He pitted from the lead, took four tires and couldn’t get back to the front in the two-lap overtime sprint.

There was little suspense in this one. Elliott reeled in Kevin Harvick with 27 laps remaining and closed out the victory. Elliott also won the Truck Series race Tuesday night at Charlotte to give him a pair of victories in a four-race stretch at the track located just a few minutes away from Hendrick Motorsports headquarters.

Elliott was charging hard on Harvick with about 35 laps remaining when he asked if he had enough fuel to make it to the finish. Crew chief Alan Gustafson replied, “Yup. Go hard.”

Elliott did just that.

Denny Hamlin finished second in a Toyota with three crew members sitting at home under suspension for an infraction Sunday night. Ryan Blaney was third in a Ford.

Elliott’s victory was the first for a Chevrolet driver in NASCAR’s return to Cup racing. Harvick won the first race back in a Ford, Hamlin won the second race in a Toyota and Brad Keselowski won the Coca-Cola 600 in a Ford.

But Elliott and his Hendrick teammates have been very strong since the series came back from a 10-week shutdown for the coronavirus pandemic. Elliott, Alex Bowman, William Byron and seven-time NASCAR champion Jimmie Johnson have all led laps — a huge boost for a team that has been rebuilding for much of the last three seasons.

The rescheduled Thursday event was disrupted by lightning and rain for nearly 75 minutes after 30 laps had been completed.

NASCAR next goes to Bristol Motor Speedway in Tennessee on Sunday for a fifth Cup race in 15 days as the series attempts to reschedule eight events in a frantic stretch of racing through Southern states. Races at Atlanta (June 7), Martinsville (June 10), Homestead-Miami (June 14) and Talladega (June 21) will follow.

NASCAR has not announced its revamped schedule after the Talladega race, but the next one up on the original schedule was a weekend doubleheader at Pocono (Pennsylvania) on June 27 and 28.

This is part of a series of stories recognizing Warren County’s senior athletes who had their 2020 spring seasons cut... read more