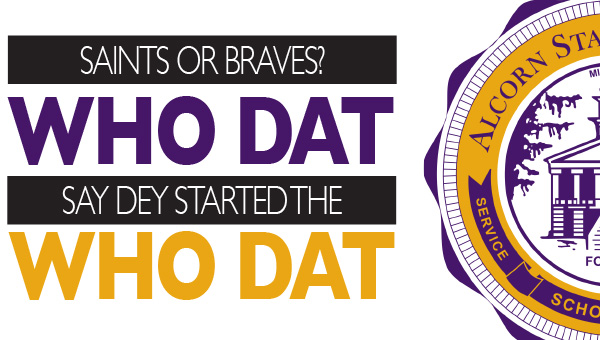 Braves or Saints: Who dat say dey started the ‘Who Dat’ chant?

In the late 1970s, Alcorn State’s men’s basketball team was as good as it has ever been. The Braves went 56-3 over two seasons from 1978-80, beat Mississippi State in the NIT and became the first HBCU team to win a game in the NCAA Tournament.

It inspired its fans to chant at games, “Who dat say dey gonna beat dem Braves?”

The chant was soon picked up by several Louisiana teams and eventually made famous by the New Orleans Saints. But a new two-part documentary series explores its origins at Alcorn State while also paying tribute to the teams that inspired it.

“The Original Who Dat” will be available for digital distribution on July 5 at the web site originalwhodat.com, its producer and director Gil Thompson said. Each episode is about an hour, and the cost for downloading the series is $7.99.

“Sometimes movie titles have a piece of what’s going on, but the ‘Who Dat?’ chant is a big part of that movie,” said Thompson, who was a point guard at Alcorn from 1978-81. “It began in January 1979 and was broadcast in March when we played in the NIT against Mississippi State. I’m happy (the Saints) were able to elevate it to national recognition. The question was, what gave it its birth at Alcorn?”

The other theme of the film tries to answer that question.

Alcorn and other Southwestern Athletic Conference schools were originally members of the NAIA, and did not join the NCAA until the mid-1970s. Alcorn, under legendary coach Davey L. Whitney, was a basketball powerhouse at the time. It won eight regular-season SWAC championships between 1976 and 1986, and the 1978-79 and 1979-80 teams were probably the best of the bunch.

The 1978-79 team ripped through the regular season with a perfect 27-0 record. It did not earn an NCAA Tournament bid because the SWAC did not have an automatic berth at the time, but did get to play in the NIT.

The Braves beat Mississippi State 80-78 in the first round of the NIT, before losing to eventual tournament champion Indiana 73-69 in the second round.

In an online trailer for the film, a clip of a foam finger with the phrase, “Who dat? Who dat talkin’ ‘bout beatin’ dem Braves?” with a 1979 copyright date on it is shown.

“I have no clue who started it. When you play with Dave Whitney your mind better be on the court. I don’t think anybody really knows who in our stands started it, but we were beating teams so bad that our fans got so deep into it that they were bragging,” Thompson said. “It caught on, and by the time we played Mississippi State two months later our fans were really into it.”

Turning an anecdote into concrete proof for the movie was not easy for Thompson. The NIT game against Mississippi State was played in the days before most games were televised, and the film was believed to be lost. A copy was eventually found by Whitney’s family — the coach, who was interviewed for the film, died in 2015 — and passed along to Thompson.

Thompson sent the video off to be professionally restored. The search for the video and the restoration process led to a long development process for the film, he said.

“I’ve been working on this for seven years. I ran into a roadblock because no one had the Mississippi State film. Then one day Coach Whitney’s son said he’d found a tape with a bunch of other tapes,” Thompson said. “My day-to-day chores didn’t allow me to continue pushing through those roadblocks.”

According to the documentary, the “Who Dat?” chant spread into Louisiana during the 1979-80 season. Alcorn finished the season with a 26-1 record — its only loss was an 83-80 defeat in an early-season rematch with Mississippi State — and made history by earning an at-large bid to the NCAA Tournament.

It was the first time an HBCU earned an invitation to the tournament, and the Braves made even more history by beating South Alabama in the first round. The second round game ended with a 98-88 loss to top-seeded LSU, which went on to reach the Final Four.

In that hard-fought loss, the “Who Dat?” chant rang through the arena. In a trailer for the film, former LSU star Rudy Macklin and former LSU assistant coach Ron Abernathy talk about hearing Alcorn’s fans yelling the chant.

“When it broke out, you couldn’t help but look around and the Alcorn fans were swaying and moving in rhythm,” Abernathy said.

Macklin said it quickly spread from one fan base to another.

“Alcorn started that, man!” Macklin laughed. “We liked that. And then later on in the tournament, our fans were saying it. So from Alcorn to LSU, that’s where it started. And now the Saints have it and everybody else has it, but Alcorn State University invented the ‘Who Dat.’”

Several other sources, including Southern University and New Orleans’ St. Augustine High School, claim to have started the “Who Dat?” chant. By 1983, however, it had become extremely popular in South Louisiana and was adopted by the New Orleans Saints.

The NFL team eventually made it an official slogan and copyrighted the phrase. The release of “The Original Who Dat” was delayed from May to July 5 in part, Thompson said, to make sure all of the legal issues related to the title and other copyrights were ironed out.

The series is Thompson’s first foray into filmmaking. A self-described “serial entrepreneur,” he has worked in a number of fields from coaching high school and college basketball, to a professional sports agent, to farming. This project, he said, scratched his itch to try something different and tell a story that’s both personal and not widely known.

“It’s satisfying to pull the pieces together, but I’m not fully satisfied until the world knows this story,” Thompson said. “For me, I love history. This is a part of history. I like telling things that people don’t know. And the love for my teammates, for Alcorn State University, and for telling history is my inspiration for this.

Chase Elliott ends frustrating week with a win at Charlotte