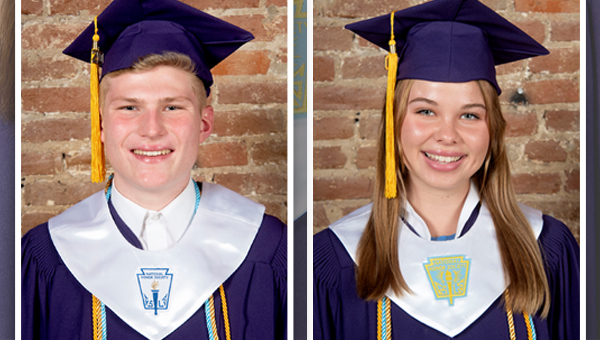 History is repeating itself at St. Aloysius High School.

Both Adam Eckstein and Ann Elizabeth Farthing will share the honor of being named valedictorian for the senior class of 2020.

In 2015, the school also had two valedictorians — Eckstein’s brother, Luke and Jacob Kitchens.

While history is repeating itself this year, the class of 2020 will also be making history.

Due to the COVID-19 pandemic, not only was the second semester of school altered, the graduation ceremony as well as the baccalaureate mass will be modified in an effort to adhere to the guidelines for social distancing.

At both events, only two family members will be allowed to participate, however, the graduation ceremony will be live-streamed.

“Despite the conditions not being ideal, you have to celebrate what you do have,” Eckstein said. “I would love to have a traditional graduation and baccalaureate Mass, but that just is not possible in these times,” he said. “I am very grateful for everything the staff at Vicksburg Catholic School has done to give us the best graduation possible. Mrs. McHan has worked tirelessly to celebrate our successes and give us a great graduation, and for that, I am extremely happy.”

“We moved many times during my childhood,” he said.

Eckstein said his goals have always been to do his best.

“Rather than trying to beat others or outdo them, I have just tried my best and used the support and competition from my classmates to help me achieve. Being named valedictorian is a great honor to earn, but it is truly a team effort that I have dreamed of but was made possible by my friends and family,” he said.

Farthing, who is the daughter of Dawn and Matthew Farthing, has attended the Vicksburg Catholic School for the duration of her education.

“Earning valedictorian has always been a goal of mine because it has pushed me to pursue more rigorous academic courses,” Farthing said, “And I am honored to share this title with Adam. He is one of my closest friends and has always inspired me to strive to achieve higher.”

“I am so happy to be able to share this honor with one of my best friends, Ann Elizabeth. She has always pushed me to try my hardest and never quit. To be named valedictorian with one of my oldest friends is something we both have contemplated for years and are glad to have it happen,” Eckstein said.

Farthing and Eckstein were both named STAR Students at St. Al and they will both have the opportunity to give a valedictorian speech at the ceremony, which is scheduled for Saturday, June 6 at the City Auditorium.

“I will be telling my class goodbye, but above all, I will be thanking them for the last four years together. I am so proud of all of my classmates, and will miss them more than anything,” Farthing said.

Eckstein said his speech will focus on the future.

“I will focus on how these last few months should not impact our high school experience significantly. It was only one-quarter of the great time we have had together, so I want everyone to remember all the fun and challenging times we’ve shared. We may have missed a normal graduation and other milestones, but nothing can take away our memories,” Eckstein said. “I want them to remember to stay strong, remain positive, and be ready for the future — for it will be unprecedented for the Class of 2020.”

Asked what their biggest regret was due to the coronavirus Farthing said, “I have realized the full extent of how I took my high school experience for granted. Many of the events we have lost during this time were supposed to be the culmination of four years of hard work and dedication. But I have realized that the memories I have made could never be canceled or postponed, and I would not have it any other way.”

“The one thing I will regret missing out on is baccalaureate mass,” Eckstein said. “While graduation closes out our high school experience academically, baccalaureate helps us find spiritual closure and prepares us for the future. Coming from a Catholic high school, I will miss this experience as it would have provided me an opportunity to share in a spiritual endeavor with my classmates for a final time and give us one last bond before heading out into the real world,” he said.

Eckstein will be attending the United States Military Academy at West Point. There are no tuition or room/board fees, but it is valued as a $400,000 scholarship. Additionally, he received a Junior Auxiliary of Vicksburg scholarship and the Army War College scholarship. He was offered a full ROTC scholarship that would have paid full tuition to a school of his choosing, which would have been MIT and a National Merit Scholarship to Mississippi State University. Eckstein was also honored by the 25th Infantry Division Alumni along with the ERDC Alumni Association. His plans are to major in aerospace engineering.

Farthing will be attending Emory University and has also been recruited to play for the school’s soccer team. She received an ERDC Alumni scholarship, a Mutual Credit union scholarship and a Rotary Club scholarship. Farthing’s plan is to major in international business.

Within hours of Gov. Tate Reeves’ announcement Wednesday that he would not extend the state’s “Safer At Home” order after... read more