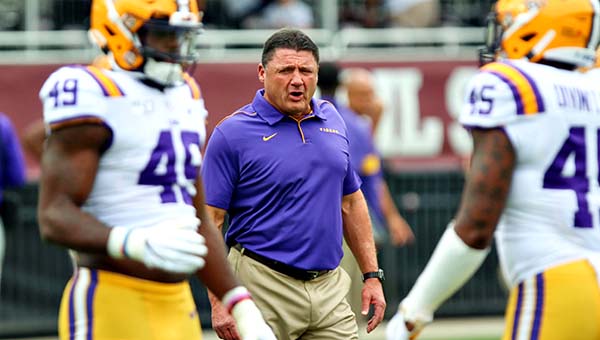 LSU head coach Ed Orgeron fires up his team before a game last season. LSU announced Monday that it has added in-state opponents Southern University and Grambling to its football schedule for the 2022 and 2023 seasons. (Walter Frazier/For The Vicksburg Post)

It will be the first time LSU has played the two in-state teams — or any others from the Southwestern Athletic Conference. Southern and Grambling have combined for 45 SWAC championships and 26 black college football national titles.

“This is an incredible opportunity to join our fan bases of these historic Louisiana institutions and championship programs,” Woodward said in a statement. “These dates will be days to celebrate not only football, but the state of Louisiana and all of our people. It’s time and we are all proud to be a part of it.”

LSU has played every other college football team in Louisiana at one time or another, except the two SWAC schools.

LSU had been scheduled to play its 2020 spring game across town at Southern’s Mumford Stadium because of construction at Tiger Stadium, but the plan was scrapped by the COVID-19 pandemic.