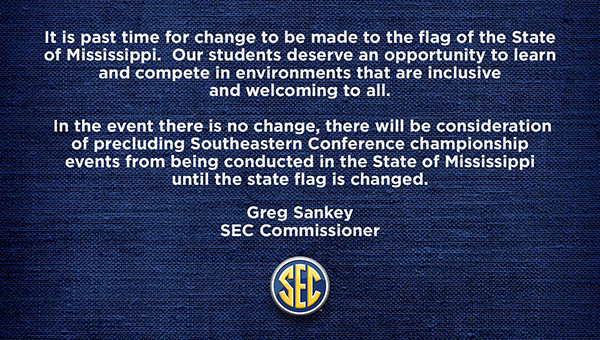 BIRMINGHAM, Ala. (AP) — The Southeastern Conference is considering barring league championship events in Mississippi until the state changes its Confederate-based flag.
SEC Commissioner Greg Sankey issued a statement Thursday voicing support for a new state flag, and threatening to keep the state from hosting conference tournaments and championships if it is not changed.

“It is past time for change to be made to the flag of the State of Mississippi,” Sankey said in his statement. “Our students deserve an opportunity to learn and compete in environments that are inclusive and welcoming to all. In the event there is no change, there will be consideration of precluding Southeastern Conference championship events from being conducted in the State of Mississippi until the flag is changed.”

The NCAA already said it would not schedule postseason events in Mississippi because of the flag that features the Confederate Battle Flag in the upper left corner.
That ban only includes events scheduled in advance, however, and not those that are based on a team’s success in a given season.

As far as the potential SEC postseason ban, it’s unclear how much Mississippi would actually be affected.

The conference’s football championship game and baseball tournament are committed to Atlanta and Hoover, Ala., for the foreseeable future. The league has a contract to hold either its men’s or women’s basketball tournament in Nashville through 2035, and contracts with other cities for other years. The men’s tournament will be in Tampa, Florida, in 2022, and in Nashville in 2021, 2023, 2024 and 2025.

Championship events in most sports such as track, softball and tennis normally rotate among campus sites. The next SEC championship event scheduled to be in Mississippi is in 2022 when Ole Miss would host the outdoor track and field championships.

“Clearly, the current national climate is such that this debate may produce unintended consequences for our student athletes here at Mississippi State University and those at the University of Mississippi,” Keenum said. “In addition, there may be similar unintended consequences for academic pursuits at our all our state’s public universities and negative economic impacts on the state’s communities as well.

“Since 2015, our Student Association, Robert Holland Faculty Senate and university administration have been firmly on record in support of changing the state flag. I have reiterated that view to our state’s leaders on multiple occasions, including during face-to-face discussions in recent days and hours. On June 12, I wrote to the governor, lieutenant governor and speaker of the Mississippi House reaffirming that support. The letter said, in part, that our flag should be unifying, not a symbol that divides us. I emphasized that it is time for a renewed, respectful debate on this issue.”

A joint statement by Ole Miss athletics director Keith Carter and Chancellor Glenn Boyce echoed Sankey’s sentiments, but also reminded people that the state flag has not flown on the Ole Miss campus since 2015.

“The University of Mississippi community concluded years ago that the Confederate battle flag did not represent many of our core values, such as civility and respect for others,” the Ole Miss statement read. “In 2015, the university stopped flying the state flag over our campus. Mississippi needs a flag that represents the qualities about our state that unite us, not those that still divide us. We support the SEC’s position for changing the Mississippi state flag to an image that is more welcoming and inclusive for all people.”

The SEC was not the only conference to cause issues with Mississippi hosting championships due to the flag.

Conference USA commissioner Judy MacLeod also issued a statement on Thursday stating the conference’s Board of Directors pledged to “conduct a process to review” their championship policies to ensure their student-athletes are in environments that align with the conference’s mission to support and protect them.

Biloxi, Pearl and Hattiesburg have all hosted Conference USA’s baseball tournament in the past 10 years. Southern Miss is scheduled to host it again in 2022.

Black Sox set up shop in Vicksburg, will play at Sports Force this weekend

The Hattiesburg Black Sox are making Vicksburg their home for the summer. The semi-pro baseball team has reached an agreement... read more