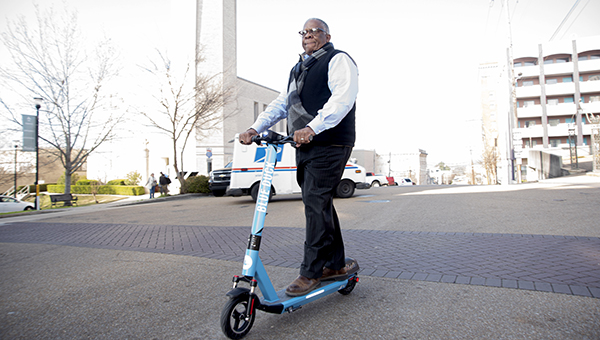 Mayor George Flaggs Jr. rides on a Blue Duck Express during a demonstration of the company's scooters in January. (Courtland Wells/The Vicksburg Post)

With the stroke of a pen, Gov. Tate Reeves could send scooters zipping through downtown Vicksburg by the end of the summer.

Tuesday, the Mississippi Legislature gave final approval to Senate Bill 2921 that would allow the city of Vicksburg to adopt an ordinance legislating the use of motorized scooters on “certain city streets.” The legislation now awaits the governor’s signature, which must be done no later than June 29.

Once signed, the city would need to adopt an ordinance allowing for the operation of scooters in the city and then advertise it for 30 days before it would be implemented. During that time, the city would be in a position to negotiate with a company on bringing electric scooters to the city, specifically downtown Vicksburg.

Earlier this year, the city announced plans to partner with San Antonio-based Blue Duck Express, which rents electric scooters as alternative transportation in urban areas, on a 12-month pilot program to use scooters in the city.

In January, when the city announced the potential partnership, Peter Gomez, Blue Duck’s vice president of operations, said the program would help determine the feasibility of having scooters in Vicksburg.

He said it will use a limited number of scooters operating in a certain area “until we get a better understanding of how frequently they’ll be utilized and what are they being used for — to get to restaurants, attractions, to get to work; there’s a great number of things they can do.”

Gomez said the scooters would be monitored using a data board the company will share with the city.

“The city will be able to see at any given time the number of rides they have per day, per week, how many are actually going on, the distance of the ride, and they can trace a map to see where the rides actually went,” he said.

Wednesday, Mayor George Flaggs Jr. said getting the legislation approved was welcome news at a time when the tourism industry is looking to rebound from the economic shutdown of the COVID-19 pandemic.

“It’s the beginning of a new exciting way of supporting tourism in a time when our tourism industry is down so much,” Flaggs said. “I know that I plan to ride one downtown on the (Fourth of July). Going to ride it all day.”

Flaggs said that if the timeline works as he hopes, scooters would be available at locations in downtown Vicksburg as early as late July and early August.

The city of Vicksburg’s annual fireworks show is still scheduled, but city officials on Wednesday announced changes to the event... read more