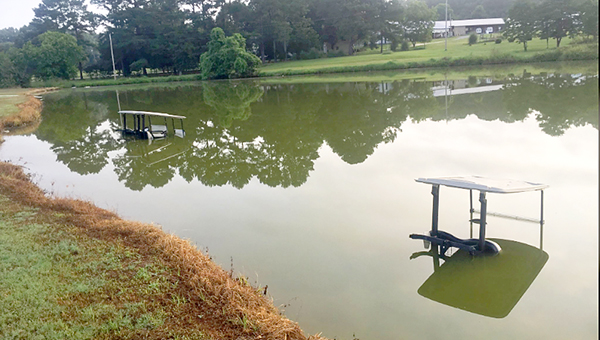 Clear Creek Golf Course in Bovina shared this photograph on its Facebook page of two golf carts nearly submerged in the course's lake.

BOVINA — The Warren County Sheriff’s Office is investigating an incident that took place early Wednesday at Clear Creek Golf Course in Bovina in which multiple golf carts were severely damaged.

Course officials said individuals removed six golf carts from the storage barn where they are kept. Of the six, three were driven into one of the golf course’s ponds, while the other three received extreme structural damage.

On a post on the golf course’s Facebook page, the damage to three carts not driven into the lake include the dashboards being ripped out, wires pulled away and fenders and bumpers dismantled.

“The three carts in the lake were determined totaled by the golf cart company; the other three may be repairable, but probably not before this holiday weekend,” the golf course said in its Facebook post.

“We are investigating a malicious mischief at Clear Creek Golf Course. It appears several nights ago someone gained access to the golf cart area, cranked up three carts and drove them into the lake,” Pace said. “In addition, it appears that someone intentionally damaged several other golf carts.”

Anyone with information on the case is asked to contact the Warren County Sheriff’s Office at 601-636-1761.

JACKSON (AP) — State officials held a ceremony Wednesday to retire the former state flag and send it to a... read more