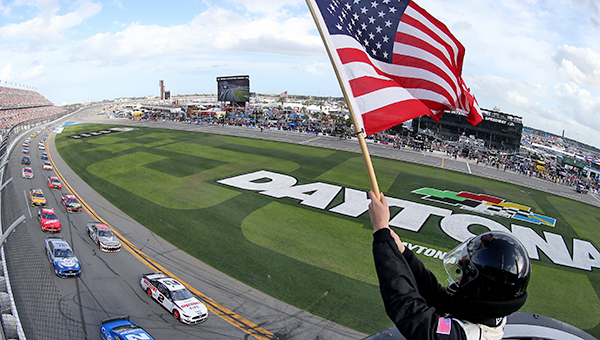 NASCAR Cup Series drivers turn a parade lap before the start of the Daytona 500 at Daytona International Speedway in February. NASCAR will run two races at the track in August — including the first ever Cup Series race on its road course — in the next phase of its revamped 2020 schedule. (NASCAR Media/Getty Images)

NASCAR will spend the weekend of Aug. 7-9 at Michigan International Speedway, with a Cup Series doubleheader on Aug. 8 and 9. The Trucks and ARCA Menards series will also run at Michigan that weekend, while the Xfinity Series goes to Road America in Wisconsin.

The following weekend will feature the first-ever Cup Series race on Daytona’s road course.
The road course-oval hybrid, most noted for the annual running of the Rolex 24 at Daytona, will feature races across all three national series and the ARCA Menards Series. The historic races will replace NASCAR’s annual visit to Watkins Glen International in New York.

NASCAR will return to Daytona two weeks later for its regularly-scheduled weekend at the track. The Cup Series will race in primetime on Saturday, Aug. 29, beginning at 6:30 p.m. On the original schedule, that was to be the regular-season finale. It is unclear whether NASCAR will extend the regular season or begin the playoffs the following week as scheduled.

In between the two Daytona trips, NASCAR will have a full weekend at Dover with a total of six races among its four series. The Xfinity and Cup series will both run doubleheaders on Aug. 22 and 23, while the ARCA Menards and Trucks series have one race each on Friday, Aug. 21.

The final race on the revamped scheduled is a Trucks Series race at World Wide Technology Raceway at Gateway, near St. Louis, on Aug. 30. The track was originally slated to host the first race of the Gander Trucks playoffs, but it will now be race No. 14 of the regular season.

FS1 will continue to carry coverage of the NASCAR Gander RV & Outdoors Truck Series for the rest of the season.

NBC and NBC Sports Network will air the Cup and Xfinity Series races.

The Hattiesburg Black Sox, an amateur baseball team based in Central Mississippi, played the U.S. Military Baseball Organization in a... read more