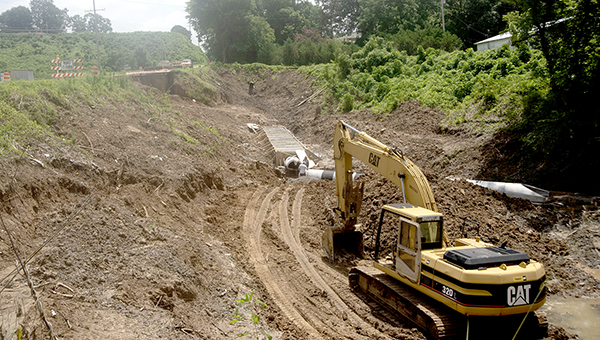 Contractors have started work on repairs to a section of U.S. Highway 80 near Vicksburg that was damaged by heavy rains in February. (Courtland Wells/The Vicksburg Post)

Employees with Theobald Construction Services LLC of Vicksburg have begun work on repairs to a section of Old U.S. Highway 80/State Route 822 that was damaged by heavy rains earlier in the year.

“Work began last week,” said Mike Flood, a spokesman for the Mississippi Department of Transportation. “They still plan to have the work completed in August, weather permitting.”

MDOT in June awarded a $339,787.50 contract to Theobald Construction to repair the section of the highway that was damaged in January and February.

State officials on Feb. 11 closed the section of the major thoroughfare between the cement plant and Mount Alban Road after runoff from heavy rains eroded the highway’s shoulder and caused the roadway to fail, making it unsafe to travel.

This damage was not the first problem to hit the highway.

In 2016, erosion caused by two days of heavy rains forced state officials to shut down both lanes of a section of U.S. 80 at Thornhill Road to repair a washout that removed dirt from under the highway’s westbound lane.

A new partnership has been created to support the market introduction of technologies invented at the seven laboratories of the... read more