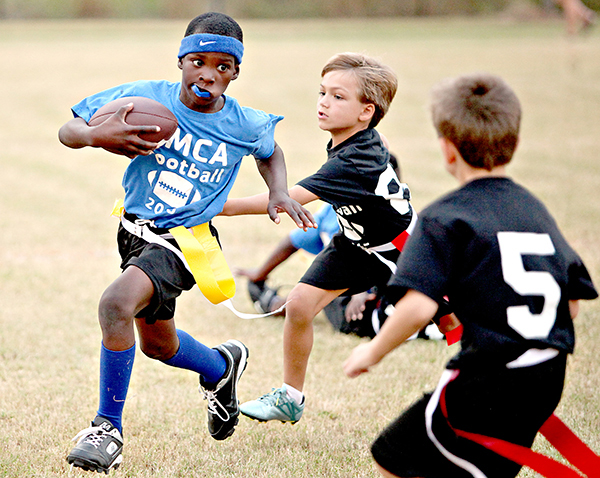 Casey Smith, left, tries to evade defenders during a YMCA flag football game in 2015. Registration for the YMCA’s 2020 flag football season will begin on Monday and continue through Sept. 1. (File/The Vicksburg Post)

The COVID-19 pandemic is threatening a lot of sports seasons in 2020, but the Vicksburg YMCA is pushing ahead with plans for its youth football season.

Registration for the YMCA’s flag football season will begin Monday, July 13, and continue through Sept. 1, the organization has announced. The league is open to children in grades kindergarten through sixth grade.

The registration fee is $50 for YMCA members and $70 for non-members. Parents can register their children at the Purks YMCA, online at vicksburgymca.com, or by calling 601-638-1071.

“This is the best time of year, where you go and watch high school football every Friday, and it might not happen this year. These kids still need activities to play, and the Y wants to be a part of the community in that effort,” Vicksburg YMCA program director Wayne Scott said.

The biggest change to the YMCA league this year is the elimination of its tackle football program for fifth- and sixth-graders. Those age groups will play flag football instead.

Scott said several factors including long-term safety concerns, COVID-19 restrictions and a downward trend in participation all led to the decision to suspend the tackle football program.

“It was a hard decision to get away from tackle football. But COVID and concussions are a major concern for us, and the priority is keeping the kids safe,” Scott said. “We’re going to evaluate what happens in the program this year, but it could very well be a permanent move.”

A number of players in recent years have elected to play for competitive youth teams such as the Vicksburg Packers and Ravens, rather than in the YMCA’s recreational league, Scott said. The YMCA’s league is considered non-competitive and focuses more on fun than results.

“Making the move to flag is the right thing to do for us,” Scott said. “We don’t look at us going in the direction of the city programs and the win at all costs scenarios. We are a recreational league.”

Flag football is a 7-on-7 game, so rather than having 20 players on each tackle team the YMCA can put about half as many on a single roster. That will help with social distancing rules on the sideline and on the field. It will also limit physical contact that could spread the virus.

Other precautions against COVID-19 will include spacing players out in the huddle and on the field, eliminating blocking and tackling, having hand sanitizer on the sideline, and other modified rules.

“We can spread kids out a little more. Contact would be if two kids were both going for a pass or actually pulling the flag. We don’t allow blocking. You can set screens like in basketball, but you can’t block,” Scott said. “We’re going to have some coaches clinics before the season starts and go over these guidelines and spacing rules. We’re going to emphasize ‘pull the flag, drop the flag.’”