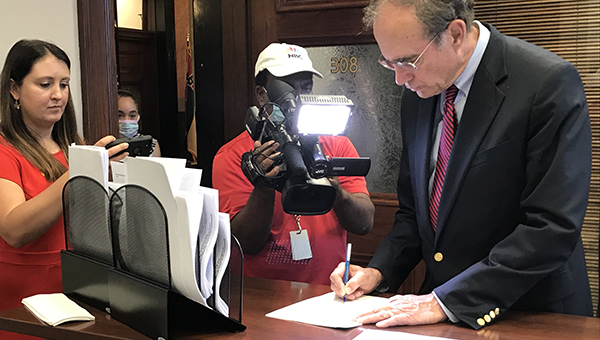 Lt. Gov. Delbert Hosemann signs House Bill 1796 on June 28. The bill approved the removal of the 1894 state flag and set up a nine-person commission to design a new flag. The new design will then go to voters in November for their approval. (Submitted Photo)

For the public viewing the proceedings of the Mississippi Legislature as the debate waged on whether or not to retire the state’s flag — a flag that had become divisive and offensive because it contained the Confederate battle emblem — they saw Lt. Gov. Delbert Hosemann, a native of Vicksburg, standing behind his podium managing the proceedings in the State Senate.

But what those viewing in person or online could not see was the transition Hosemann personally had in his move to support the retiring of the flag and the work he did behind the scenes to push for passage of the historic legislation.

“We worked really hard,” Hosemann said of the efforts to both draft and pass legislation that ultimately passed the House and Senate by overwhelming margins on June 28. Two days later, Gov. Tate Reeves signed the legislation, which marked the official end to the now-former state flag. “I was still working with senators up until the minute I went to the podium. It was not completely a fait accompli that the matter would pass at all … I will tell you it hung in the balance until the very, very end.”

But, in the end, both chambers passed House Bill 1796 which retired the state’s current flag and set up a nine-person commission to design a new one. The approved design would then be placed on the ballot during November’s general election. If a majority of voters approve the flag, then the state has a new flag. If not, the commission literally goes back to the drawing board and starts the process all over again.

For Hosemann, even the act of working for the legislation in the first place was a change of heart. While he had advocated for a new state flag, he felt the matter should be decided by the voters and not legislators. That position was pushed when he saw the tide of support for a change turning in the state and saw the number of people and groups lining up to urge legislators to retire the flag.

Ultimately, Hosemann said it was his family — his children and grandchildren — that provided the strongest motivation to move forward.

“I simply came to the conclusion that it was time for Mississippians to face this issue. I looked at my own children, my own grandchildren and I wanted them to grow up in a place — a place where we work together, we worship together, all of our children live together, go to school together — that could be united, mainly for my children and grandchildren,” Hosemann said. “The more I thought about, the more I prayed about it, it was time for Mississippi to make that change.”

He also said the groups that were working together to advocate change were groups that had never been so strong in their cause before, giving him ease in changing his position on whether or not lawmakers were the best choice for making the change.

“I felt, clearly, from my own conversations — and I cannot tell you how many groups and organizations in Mississippi reached out — the matter, if it went to a vote was going to pass,” Hosemann said. “Once I came to that conclusion, then it came to me if it is going to pass, I questioned whether is it better to do a referendum to vote on the flag, or move ahead and make the change.”

Hosemann said he did not want the state to go through a year and a half — given the matter would not have been able to be placed on November’s ballot — where the state “would be buffeted with unsubstantiated claims about our people.”

“My change was motivated by looking at all of the facts, and also looking at the fact we could have significant harm in Mississippi if we were to draw this out,” he said. “Finally, I was able to negotiate ‘In God We Trust’ in the legislation and also negotiate that Mississippians would vote on the flag. That solved my issue.”

As for the upcoming process of selecting the next state flag, Hosemann has confidence in both the commission that will work to design the flag and the voters of Mississippi.

My feeling is we will have nine good men and women who will make a choice of some. They have a blank piece of paper or cloth and will come up with something that is hopefully a majority of Mississippians will agree with. And if they don’t we have a back-up procedure,” Hosemann said. “They will have open meetings, have people offer designs, and look at the history of Mississippi, where we want to be in the future, all of those things will be taken care of and we will get a good flag out of that.

“As long as more than half of us want to go under that flag, then we will be good,” he said. “That was simply not the case with the previous flag.”

He said now the work of picking a state flag is with the voters of Mississippi.

“There will be no flag unless Mississippians vote for it, not the Legislature. We’ve got a process,” Hosemann said. “The voters will select that flag, and if they don’t select that flag (that is on November’s ballot), we will do another one until such time Mississippi voters select the flag they want to fly over them.”

Flaggs against mandating masks for Vicksburg