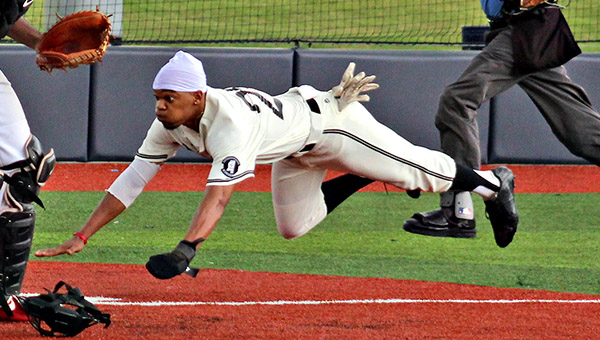 With a roster stocked with players from in and around Warren County, and having moved their home games to Sports Force Parks on the Mississippi, the Hattiesburg Black Sox have made a strong claim to being Vicksburg’s team this summer.

On Sunday, they maintained their status as Mississippi’s team as well.

Former Warren Central star Layne Tedder pitched four strong innings, and his old high school teammate Marcus Ragan reached base twice and scored a run to lead the Black Sox to a 5-2 victory over the Jackson 96ers in the championship game of the Mississippi Baseball Congress amateur state tournament.

“Every year you win one, it’s showing that you’ve still got it,” said Black Sox pitcher Clyde Kendrick, a former Vicksburg High star. He pitched a scoreless seventh inning to earn the save.

The Black Sox, an amateur team comprised of former minor leaguers and college players, mixed in with some current college players, certainly have “It.” This was their third consecutive amateur state championship, and seventh in 12 years. The seven championships tied the record for a tournament that is nearly 80 years old.

Besides a trophy and bragging rights, the reward is some more baseball. The Black Sox were one of 12 teams selected to play in the National Baseball Congress World Series in Wichita, Kansas, beginning Aug. 2.

“We would come to this tournament for a couple of years when we were a lot younger team and get the crud kicked out of us. Instead of sitting down and complaining about it, we kept trying to get better and better,” Black Sox coach Trey Aby said. “We’ve loaded up and got real lucky. We got some players from the Vicksburg area that are stellar. These are guys that should be playing on TV, and they decided to come play with us, and we’re happy to have them.”

Aby added that he thinks the Black Sox have the talent to contend for a national championship when they get to Wichita next week. The slimmed-down tournament and a format change from pool play to double-elimination both favor the team, he said.

“The Black Sox are built for double-elimination, with the pitching we have and the position players. I feel really good about it. Used to be, you had to go 3-0 and we’d go up there and go 2-1. I think we’re starting to hit our stride,” Aby said.

The Black Sox went 3-0 in the state tournament this weekend, beating the 96ers twice and the Mississippi Stars once. They waited out a one-hour rain delay and scored five runs in the first two innings of Sunday’s championship game to take a big early lead they never relinquished.

Ragan set the tone when he led off the game with a single and then scored from second on a sacrifice fly by Justin Smith. The 96ers’ Jaden James made a leaping catch against the center field fence and, as he showed the ball to the umpire, Ragan was hustling around third and on to home with the game’s first run.

“That was my first time,” Ragan said about scoring from second base on a sacrifice fly. “I surprised myself. Once I saw him catch it and he was showing the ball to the ump, I just kept running. When I saw him fall and show the ball, I knew I was going to score.”

Echols was named the tournament’s MVP.

The 5-0 lead was plenty of run support for Tedder. He allowed two runs, one earned, and struck out three batters in four innings to get the win. Garrett Ramsey followed with two innings of scoreless relief, and Kendrick worked around a hit and a walk to strike out the side in the seventh.

“Run support is always a big factor, and these guys jumping out and putting five up in the early part of the game lets you relax. Baserunners don’t really play a factor when you know you can spare one or two,” said Tedder, who played college baseball at Hinds and Delta State.

The 96ers also had plenty of ties to Vicksburg. Four Warren Central alumni — Vantrel Reed, Caleb Sterling, D.J. Lewis and P.J. Mims — were in the starting lineup on Sunday and combined for four of the team’s eight hits. Mims led all players in the tournament in batting average.

Haden Luke, a 2020 St. Aloysius graduate and Mississippi Delta Community College signee, started at first base and went 1-for-3 with a single. The 96ers are coached by Vicksburg native Roosevelt Brown.

The plethora of Warren County ties led to plenty of friendly banter between the teams, and the feel of an intense but good-natured game among family members.

Kendrick and Lewis talked trash to each other during an at-bat in the bottom of the seventh inning, bringing a warning from the umpires. Players and coaches on both sides quickly objected to it, laughing it off as the joking that it was rather than anything with ill intent.

The two toned it down, and Kendrick struck out Lewis for the second out of the inning.

“That’s my younger self. I look at him like he’s a younger me,” Kendrick said of Lewis. “I’ve coached him and helped him with hitting and stuff. But when you coach them, you know their weakness so you will attack it. With me and D.J., he knows that’s friendly talk.”

Seth Foshee wasn’t able to replicate his outstanding first round at the Warren County Championship on Sunday, but it didn’t... read more