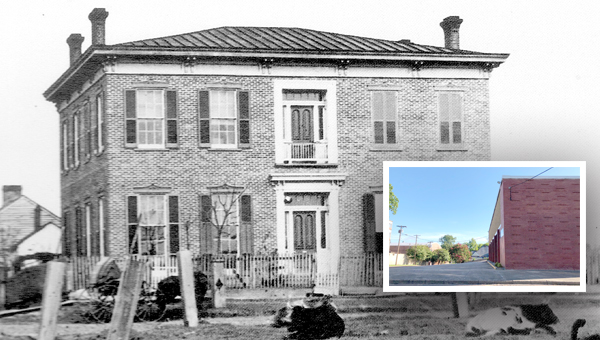 Looking back: The story behind Dr. Harper and the house he built

The house, once owned by Dr. T.J. Harper, was built in 1866 by Dr. Thomas J. Harper and his second wife, Elizabeth Ann Harper, according to an article in the Vicksburg Evening Post that announced her death in 1904. The home was located at the corner of Crawford and Adams streets.

While very Greek Revival in proportions, the house exhibited the following popular style of Italianate with its bracketed cornice and arched paneled doors.

Dr. Harper was born near Petersburg, Dinwiddie County, Virginia on March 25, 1801, and graduated from a school in Philadelphia in 1822. He married his first wife, Mary Thomas, in 1827 and they moved to Clinton in 1835, then to Vicksburg in 1837, raising four daughters.

Harper was a member of the Vicksburg Warren County Whig Club and was a Mason in Lodge No. 26. He also presided over the convention that organized the Grand Chapter of Royal Arch Masons in Mississippi in 1846.

In 1854, he was on the city of Vicksburg’s committee that welcomed ex-president Millard Fillmore to town.

Mary Harper died of heart disease on May 3, 1861, at 57 years old. In 1864, Thomas married Elizabeth Ann Bolls, whose husband Sam had died in 1861 at the family’s plantation in Edwards, which was a part of the Champion Hill battlefield.

Dr. Harper died on January 18, 1886, at the age of 85 and the Vicksburg Evening Post reported, “the death of this revered and grand old landmark will not only cause deep and universal sorrow in every household of Vicksburg but throughout the State and this entire section of the country. His life was full of good works and he was beloved by one and all. His name and deeds and virtues will constitute one of the brightest and most valued pages in our city’s history and the tears of the people among whom he has lived for two generations will bedew his grave and the monument to his memory will exist in their hearts.”

After her husband died, Mrs. Harper operated her home as a boarding house as she was already providing lodging for two of her nieces.

Mrs. Harper died in her home on Aug. 23, 1904, at the age of 81. She was a member of Crawford Street Methodist Church and was known for her many kind and charitable acts.

The house continued as a boarding house in 1906 with Jones, T.J. and Olga Chandler, Thomas and Lessie Peatross, Frank and Lillie Ross, Robert and Lena Trexler, and William and Marye Hanes living there.

By 1911, W.G. and Louisa Paxton resided there with Mrs. Lou Oates. Paxton was the treasurer and trust officer for the American Bank and the manager of the Mississippi Electric Company.

The house was again a boarding house in 1921 run by Joanna Jackson, and then it is listed as the home of Mollie Jackson from about 1924 into the late 1940s.